Update Required To play the media you will need to either update your browser to a recent version or update your Flash plugin.
By Dan Friedell
17 August 2021


After quickly taking over major Afghan cities and the national government in the past week, the Taliban offered promises Tuesday to rule the country differently than in the past.

In statements to reporters, leaders of the group offered to respect women's rights, forgive those who resisted them and to ensure a secure Afghanistan.

The Taliban comments appear to be an attempt to position the group as more moderate than when they imposed extreme rule in Afghanistan in the late 1990s.

But many Afghans remain fearful of a Taliban-led government and foreign governments are also worried. On Monday, thousands of citizens raced to the airport in the capital, Kabul, in hopes of fleeing the country a day after the Taliban seized the capital and took over government headquarters. U.S. officials said at least seven people died in the chaos.

Mujahid promised that the Taliban would honor women's rights, but only within the norms of Islamic law. He did not provide additional details. He said the group also wanted private media to "remain independent," but stressed that reporters "should not work against national values."

Mujahid added that the Taliban would secure Afghanistan and offer an "amnesty" across the country for people who had worked for or supported foreign "occupiers." If someone offers amnesty to another, it provides forgiveness without fear of punishment. 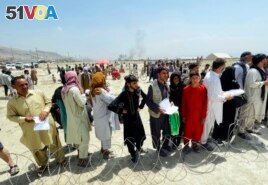 Hundreds of people gather outside the international airport in Kabul, Afghanistan, Tuesday, Aug. 17, 2021. The Taliban declared an "amnesty" across Afghanistan and urged women to join their government Tuesday.

The Taliban last held power in Afghanistan in the late 1990s. Many Afghan people remember the group's rule as brutal and ultra-conservative.

The Taliban's rule was based on strict Islamic law. The law included heavy restrictions on women and extreme punishments such as cutting off body parts and throwing stones at those who broke rules.

The Taliban was forced out of power by a U.S.-led invasion in 2001. The group was ousted for providing refuge to Osama bin Laden and al-Qaida - the extremist group that attacked and killed 3,000 Americans in the terrorist event known as September 11.

Even though the Taliban said it will not go after its enemies, some people in Kabul said the group had kept lists of people who helped the former government or countries like the U.S.

A broadcaster in Afghanistan said she was in hiding because Taliban fighters were looking for journalists.

Enamullah Samangani is a member of the Taliban's cultural commission. He said the new leadership, which is called the Islamic Emirate of Afghanistan, wants to give women chances to work and study and work in government. He repeated, however, that such activities would only be permitted under "Islamic law" rules and in keeping with the group's "cultural values."

Samangani did not explain what he meant by "Islamic law."

Rupert Colville is a spokesman for the U.N. Human Rights Commission. He said the Taliban needs to honor its promises and that "hard-won advances in human rights" must be defended.

Germany and Sweden said they would both reduce the amount of money it sends to Afghanistan. Great Britain, however, said it would increase financial assistance to help people in need.

Even with flights landing and some taking off at Kabul's airport, people wondered whether it was safe.

An Afghan official told the Associated Press that Taliban fighters entered the civilian part of the airport and fired guns to chase away about 500 people who were there.

The Associated Press reported that talks continued Tuesday between the Taliban and several Afghan government officials about the country's future. The officials included former President Hamid Karzai and Abdullah Abdullah, who once headed the country's negotiating team.

Afghan President Ashraf Ghani flew out of the country over the weekend with his vice president and other senior officials.

Officials with knowledge of the latest talks told the AP the discussions centered on how a Taliban-led government could work with other groups. Talks on power-sharing could be complex because of the changes Afghanistan has experienced over the past 20 years, the officials said.

Dan Friedell adapted this story for Learning English based on reports from the Associated Press. Bryan Lynn was the editor.

What can the Taliban do to make you believe their promises? Tell us in the Comments Section and visit 51VOA.COM.

impose – v. to order or put in place

chaos – n. a situation in which there is no order

strict – adj. describing a command, rule or something that must be exactly obeyed