Update Required To play the media you will need to either update your browser to a recent version or update your Flash plugin.
By John Russell
24 April, 2019

Babies have been a popular subject on social media in recent days.

People are writing a lot on Twitter and other social media platforms about the impending birth of the first child of Britain's Prince Harry and Meghan Markel, the Duchess of Sussex. 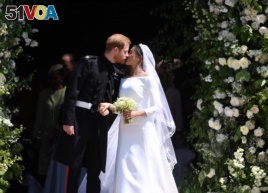 Prince Harry and Meghan, the Duchess of Sussex, kiss as they leave St George's Chapel at Windsor Castle after their wedding, May 19, 2018.

She and her husband, married in 2018, have been keeping many details about the baby's birth secret. They say they do not know the baby's sex and have not told the public where the baby will be born.

The secrecy around the birth has been a hot issue on social media. Writer Tina Brown noted that she supports Meghan Markel's decision to keep details of the baby's birth private – a decision that breaks from what Britain's royal family has done in the past.

"I think Meghan is totally entitled to do things differently," she wrote.

American broadcaster Kasie Hunt wrote that she supports the Duchess of Sussex. In a Tweet, she added that Meghan Markle's critics can "#getoffmylawn."

This is a term an older adult might use to chastise young people for doing something they are not supposed to do.

Many media organizations have released or published stories about where the baby will be in the royal succession line. The television program "Good Morning America" noted that the baby will be seventh in line for the throne.

The Evening Standard, a British publication, noted that the secrecy surrounding the birth has created a situation for some people to gamble. Specifically, they are making predictions about the sex and name of the baby, which bookmakers expect to be a girl.

Many believe that Grace, Diana, or Elizabeth will be the name if the baby is a girl.

If it is a boy, many suspect the name will be Albert, Arthur, or James.

And that is What's Trending Today.

John Russell reported on this story for VOA Learning English. George Grow was the editor.

chastise – v. to criticize someone for doing something wrong

succession – n. the act or process of getting a title or right after the person who had that position or right before you has died or is no longer able or permitted to have it

throne – n. a ceremonial chair of a ruler

gamble – v. to play games of chance for money

specifically – adv. used to point out the exact identity, purpose, or use of something

bookmaker – n. a person who decides how likely it is that an event will take place