Update Required To play the media you will need to either update your browser to a recent version or update your Flash plugin.
By Faith Pirlo
07 October 2022


Hello! This week on Ask a Teacher, we will answer a question from VSRC Murthy in India about some stormy weather. 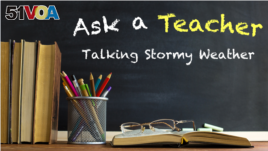 I have a question about the differences and similarities among these words: "hurricanes," "typhoons," "tornadoes," "cyclones," and "thunderstorms."

Thank you, VSRC Murthy! Your question is timed well. Powerful storms have been in the news recently, from a hurricane that hit the southern United States to a typhoon that blew into the Philippines, Vietnam and Thailand.

Which word you might use to describe a storm often depends on where you are in the world. Let's start with hurricane.

Merriam-Webster Dictionary says that word means a tropical cyclone with winds of 119 kilometers an hour or greater, and usually including rain, thunder, and lightning. The term is used for such storms in the North Atlantic Ocean down to the Caribbean Sea.

Typhoons are the same kind of powerful ocean storm, or cyclone, but that term is used for storms in the Northwest Pacific Ocean.

In the South Pacific and Indian Ocean, these storms are more commonly called tropical cyclones.

All of these storms are considered cyclones because they rotate or move in a circular motion across tropical or subtropical warm waters.

You may have heard names like "tropical depression" or "tropical storm" in news coverage of hurricanes and the like. These kinds of storms can lead to a hurricane or typhoon depending on the speed of the winds.

Hurricanes and typhoons include thunderstorms and storm surges from ocean water that can lead to coastal flooding.

Thunderstorms are heavy rainstorms in which you can hear thunder. During thunderstorms, winds are strong and there is always lightning. You can find thunderstorms in different parts of the world, not just in the tropics.

When thunderstorms become severe with intense winds, tornadoes can form. Tornadoes are narrow storms that start in a thunderstorm and touch the ground. They are very violent and destructive.

Here are a few examples of how we can use these words in sentences:

Hurricane season in the Atlantic Ocean is from June through the end of November.

Typhoon Noru quickly strengthened into a super typhoon last week with winds up to 175 kilometers per hour.

Often in the summer, thunderstorms form in the afternoons bringing heavy rain and lightning.

Tornado Alley is an area in the central United States where tornadoes happen often.

Please let us know if these examples and explanations have helped you, VSRC Murthy!

rotate – v. to turn or cause something to turn in a circle

tropical – adj. of or occurring in the tropics

surge – n. an abnormal rise in the level of the sea along a coast caused by the onshore winds of a severe cyclone

thunder – n. the loud sound that comes from lightening in the sky