Update Required To play the media you will need to either update your browser to a recent version or update your Flash plugin.
By VOA
01 September, 2015


The world famous Boston Symphony Orchestra normally performs at Symphony Hall in Boston, Massachusetts. But its summer home is the Tanglewood Music Center in western Massachusetts.

The Boston Symphony Orchestra also has a summer program at Tanglewood. It is designed for young singers, musicians and those who create musical works. Composers like Aaron Copland, Leonard Bernstein and John Adams have worked there.

This summer, the Tanglewood Music Center has been celebrating its 75th anniversary.

Serge Koussevitzky led the Boston Symphony Orchestra in 1940. At the time, Europe was at war. The United States did not enter World War II until the end of 1941. Mr. Koussevitzky persuaded people in the music industry to open a music school at Tanglewood, the BSO's summer home. He wanted young, gifted musicians to attend the school for free.

But within two years, the program almost came to an end. Jeremy Eichler is a music critic for The Boston Globe newspaper.

"The BSO trustees wanted to close the school because of the war and Koussevitzky was outraged, and wrote a letter calling it an "act of artistic vandalism." And said, "precisely now is the time when the world needs to be hearing this music."

"This music" was not just works by Beethoven or Brahms. It was the sounds of the time. 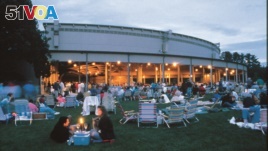 Paul Hindemith was a refugee from the war in Europe. He was chosen as the first head of Tanglewood's music composition department. He and Copeland decided that the school would be a place where composers write new musical works.

Their first performance was "Alleluia," a piece written by American composer Randall Thompson.

"Alleluia" has opened the school's program every summer since it was first performed.

Since it opened, Tanglewood's young musicians, singers and conductors have performed many new compositions. They include the first American performance of Benjamin Britten's opera "Peter Grimes." This year, for its 75th anniversary, the center asked composers to write 34 new pieces of music.

Jeff Lunden reporte this story from Lenox, Massachusetts. Christopher Jones-Cruise adapted it for Learning English. George Grow was the editor.

vandalism – n. the act of deliberately destroying or damaging property

composition – n. a written piece of music, especially one that is very long or complex

Does your country have a place where new music is written? We want to hear from you. Write your thoughts in the comments section.