Update Required To play the media you will need to either update your browser to a recent version or update your Flash plugin.
By Anna Matteo
12 March 2021


As she removes the fish from the oven, smells of garlic, pepper, and lemon fill the community kitchen.

For Glenda Andrew, the smells bring back memories of family meals, community events and religious get-togethers. They bring her back to the warmth of her native Caribbean in the middle of a cold, gray British winter that has seemed darker because of COVID-19.

This is food for the soul, Andrew told the Associated Press.

The 57-year-old adds that such food is needed now more than ever for Britain's older immigrants. Most of them have not been able to see their family and friends in many months because of the pandemic.

Once a week, Andrew joins other volunteers to prepare hot meals with flavors of the islands. They bring the hot meals for free to people in an area called Preston, as well as surrounding communities in northwestern England.

This area has recorded some of the highest numbers of coronavirus cases in Britain.

The home-cooked meals are a reminder of home. One day a week for the last 42 weeks, the seniors on Andrew's list have enjoyed island specialties such as jerk pork, curry goat, and cow foot soup.

The meal program grew out of her work with an organization called Preston Windrush Generation & Descendants. The group fights for the rights of early immigrants from the Caribbean and other former British colonies. In recent years, they found themselves threatened with deportation. 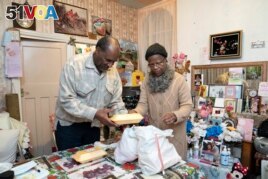 The Windrush Generation is named after the ship that carried the first migrants from the Caribbean in 1948. It came to Britain following a government call for workers from throughout the Empire to help rebuild the country after World War II.

But in 2018, long-term legal residents lost jobs, homes, and the right to free medical care as part of a crackdown on illegal immigration. Many arrived to Britain from the Caribbean as children. They did not have paperwork proving their right to live in Britain. Some were detained. An unknown number were deported to countries they did not know or remember.

When the coronavirus pandemic struck Britain, the free-spirited Andrew did not want the community to be victimized again. So, she created the food program. Her food honors the tastes of the people she grew up with.

She uses the best food she can find. "They're worth it," she said. "They brought us up, they've taught us so many things. They gave up their life in the Caribbean to come here.''

In addition to food, the volunteers offer a bit of human contact.

The loneliness of the past year has been painful for many of the seniors. When the hot meals arrive, they get to talk with the volunteers and share stories.

Sylius Toussaint is 81 and came from the island nation of Dominica in 1960. He said talking with the volunteers helps him as much as the food does.

He told the Associated Press, "They say ‘hello' and give you a meal, and maybe for just a few seconds at least you see someone new; someone you haven't seen all week," Toussaint says, smiling at his wife. "If you are on your own, it is so nice to see a fresh face — especially bringing gifts."

Britain's COVID-19 vaccination program may soon mean lockdown restrictions will be eased. But Andrew wants to keep making and sharing her island meals.

The project runs on donations and the energy of Andrew. She seems to be in several places at once as she organizes the volunteers.

In the future, she said, she hopes to find a place where the community can meet and spend time together. But for now, the volunteers plan to continue to connect with the community through food.

Danica Kirka reported this story from London for the Associated Press. Anna Matteo adapted it for VOA Learning English. Ashley Thompson was the editor.

oven – n. a piece of cooking equipment that is used for baking or roasting food

soul – n. the essential or most important part of something

flavor – n. the quality of something that affects the sense of taste

freeze – v. to become a hard substance (such as ice) because of cold

deportation – n. the removal from a country of an alien whose presence is unlawful or prejudicial

crackdown – n. a serious attempt to punish people for doing something that is not allowed : an increased effort to enforce a law or rule

lockdown – n. the confinement of prisoners to their cells for a temporary period as a security measure