Update Required To play the media you will need to either update your browser to a recent version or update your Flash plugin.
By VOA
04 May, 2015


Elpheus Ndlovu has come a long way from his village in the South African province of Mpumalanga. He once worked as a taxi driver. Now, he makes fishing flies – artificial, man-made flies that are used to catch fish. The flies he now ties are used all over the world by fishers to make record-breaking catches.

A man tests a fishing reel in the Fly-Fishers Unlimited store in Johannesburg. Next to him is a quiet man in his 40s. Elpheus Ndlovu is affectionately known as ‘Alphons' in the fly-fishing community. He is seated at a table. Right now, all of his attention seems to be on a fastener that holds a fishing fly. He wants the fly to look like a grasshopper.

"Some guys, they send you a picture, just a picture, and they say, ‘I want this fly. And if you check in the picture, you have to look at what exactly what material it is, and then you do it, hey. Some guys also, they like to change a fly and say, ‘I want something different on this fly,' so it can catch more fish. I can do that also."

Elpheus Ndlovu uses both natural materials, such as bird feathers, and artificial ones, like plastic and foam. His goal is to make flies look like real creatures -- insects, frogs, minnows and crabs -- that fish feed on.

He remembers the first fly he ever tied, more than 20 years ago. It was a clouser minnow. Made of pink and white buck-tail, it was used to catch saltwater gamefish.

"It took me maybe like a half an hour because I didn't know what I'm doing! Now it can take me about five minutes to tie just a clouser."

Elpheus Ndlovu likes to remember the day back in 1994 when he saw the newspaper advertisement that changed his life. The ad was for an apprentice fly fishing rod builder. At the time, he was still driving a taxi.

While making fishing rods, he met the owner of Fly-Fishers Unlimited, Murray Pedder, who taught him to how tie flies.

Mr. Pedder says Mr. Ndlovu has developed into one of the best fly tiers on the planet.

"He's better than me in certain flies, without a doubt, because he's just tied hundreds and hundreds of them, you know."

Mr. Pedder jokes that Mr. Ndlovu is so good that he even has "groupies" – people who like what he does and who follow him around.

"Yeah, a lot of the guys, when they walk in the shop, they just say, ‘How is it, Murray?' and they go straight to Elpheus because they know he's tying the flies. ‘Alphons' is the man and he's brilliant at it. He's got a band of loyal clients who regularly come in and say, ‘Look, I'm going here, I'm going there.' These flies catch fish all over the world and it's nice to get feedback. It makes us feel great." 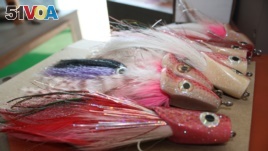 Mr. Ndlovu says there is nothing better than getting a telephone call from a happy fisherman, thanking him for tying a fly that resulted in a dream catch.

"It makes me feel great. Hey, I've got guys! They can go fish with my flies, then they call me, they say, ‘Elpheus! Brilliant'! Some of them they even come and give me something like whisky, sometimes, or whatever!"

Mr. Ndlovu says neither he nor anyone in his hometown of Soweto believes that he is a gifted fly tier.

"I'm known all over the world because of what I'm doing -- tying flies. But I never thought I would be like this. Because I just came here in Joburg (Johannesburg) to look for a job..."

Instead of a job, Elpheus ‘Alphons' Ndlovu has found a job that has enabled him to buy a house and to educate his four children.

Sitting behind his fastener, he shakes his head and says, "Life is strange." And then he proceeds to tie another perfect fly.

This report was based on a story from reporter Darren Taylor. Marsha James adapted it for Learning English. George Grow was the editor.

minnow – n. a small fish that is often used to catch larger fish

apprentice – n. a person who learns a job or skill by working for a fixed period of time for someone who is skilled at that job

groupie – n. an enthusiastic supporter or follower of something