Update Required To play the media you will need to either update your browser to a recent version or update your Flash plugin.
By Mehrnoush Karimian-Ainsworth
06 June, 2016

Two New Jersey newlyweds got an unexpected gift at their wedding reception: a performance by Taylor Swift.

The superstar played a version of her song "Blank Space" at the reception of Max Singer and Kenya Smith in Long Beach Township on Saturday. The amazed couple and their guests looked on and sang along.

Swift agreed to attend the wedding after getting a letter in April from the groom's sister. In the letter, she wrote about how her brother and their ailing mother danced to Swift's song after the newlyweds were married in his mother's hospital room. 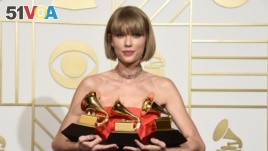 Taylor Swift poses in the press room with the awards for album of the year for 1989, pop vocal album for 1989 and best music video for "Bad Blood" at the 58th annual Grammy Awards at the Staples Center on Monday, Feb. 15, 2016, in Los Angeles. (Photo by Chris Pizzello/Invision/AP)

Not only did Swift perform her song for the couple, but she also presented them with a gift she made: a special card in a frame that stated, "So It's Gonna Be Forever,'' a lyric from "Blank Space."

The bride's cousin posted this picture of her holding the gift from Swift, stating, "She loves it!"

In another picture, Swift congratulated the couple.

In his Twitter page, the brid'¡s cousin thanked Swift for attending the wedding, saying,"¡It will be a wedding we will never forget"¡

Write to us in the Comments section. Who would you like to surprise you at your wedding?

newlywed ¨ n. a person who has recently married

reception ¨ n. a social gathering to celebrate something or to welcome someon?

third wheel - idiom–¨ a person who feels like an unimportant part of a group, usually with a couple