Update Required To play the media you will need to either update your browser to a recent version or update your Flash plugin.
By Christopher Jones-Cruise
09 April, 2017


Should American high school students know at least as much about their country's historic documents as immigrants seeking citizenship? Many states and schools are asking that question.

People who want to become American citizens must know about the Declaration of Independence, the Constitution and the Federalist papers. These documents were written in the late 1700s by some of the founders of the country.

But, some experts say American students generally know little about these founding documents. They say if students do not understand the documents, they cannot know how the American system of government operates. 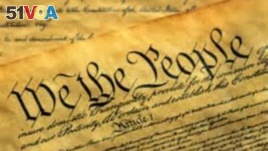 The United States Constitution helped establish the US and still rules it today. But do American students know much about it?

So, an increasing number of American schools are requiring students learn about these documents before they can graduate. Individual states are using different methods for teaching the subject.

Since 2012, Kentucky, Arkansas and at least 12 other states put into effect such requirements. Students in those states learn about the founding documents as part of their social studies classes.

But lawmakers in other states -- including Minnesota -- want to give students a greater understanding of the documents. They want schools to teach a separate course about them.

Maida Buckley is a retired history and government teacher in Fairbanks, Alaska. Last year, she spoke at a meeting of state legislators studying the issue of civics education. She supports expanded study of the founding documents.

Buckley says, "when you have a system of government that is based on ideas -- espoused in the Declaration of Independence and carried out with a working document in the Constitution -- those ideas need to be taught."

In many states, Republicans and Democrats support the teaching of the documents, although their reasons may differ. Some are concerned about the lack of public involvement in school boards and town halls. Others are worried about the way Republican President Donald Trump and his supporters use their power.

Gregg Amore is a member of the Rhode Island House of Representatives. He also has taught history classes in high schools for many years. He supports a bill that says the "survival of the republic" depends on Americans understanding their country's principles and history.

He says "we clearly have seen there is a serious civics deficiency in this country, all the way up to the top -- the very top."

The Joe Foss Institute is a non-profit civics education group based in Arizona. It is campaigning to persuade states to pass laws requiring their students to know the answers to the questions on the citizenship test.

But some supporters of civics education do not support such laws.

Charles Quigley is the executive director of the Center for Civic Education. He says students take too many tests already.

Quigley's group developed "We the People," a nationwide civics education program. Some teachers at North Smithfield High School in Rhode Island are using the "We the People" curriculum to teach about the founding documents. The curriculum calls for students to take part in a national competition in which they must defend their ideas.

Recently, students debated whether police may search a suspect's smart phone without receiving permission from a judge. They talked about the Constitution's limits on searches. And they discussed the past opinions of Supreme Court justices about searches.

Natalie O'Brien is the teacher. She tells her students to think about the more than 200 years of American history and legal thought.

Megan Skinner is a 15-year-old student at the school. She says she did not think about politics before she took O'Brien's class. But she says now she uses the founding documents when her family and friends talk about President Trump's administration.

"It gives us an entirely new perspective on all the events that are going on," Skinner says. "You see all these things in the news, and especially about the election, and all the things that are going on with the executive orders he (signed), the travel bans. Before this class, we wouldn't have understood these things."

The Associated Press reported this story. Christopher Jones-Cruise adapted the report for VOA Learning English. Caty Weaver was the editor.

civics – n. a social science dealing with the rights and duties of citizens

espouse – v. to take up and support as a cause

republic – n. a form of government with a chief of state who has term limits

deficiency – n. the state of lacking some necessary quality

perspective – n. the ability to understand what is important; the direction in which someone looks at an object