Update Required To play the media you will need to either update your browser to a recent version or update your Flash plugin.
By Alice Bryant
11 July 2021


For many people involved in the theater, the past year has been difficult. For others, coronavirus closures have provided new opportunities using technology.

Even before COVID-19 restrictions closed theaters, the company had shared recorded performances as movies. This helped people who could not get to London or New York City to see the live shows.

The pandemic has turned even the smallest theaters into producers of streamed programs. These are available on the internet outside of their local communities.

For some theater lovers, a screen cannot replace a live performance. But some observers predict that online theater is here to stay. And a generation that has grown up with computers and mobile phones might like it better than live theater.

The Royal Shakespeare Company, or RSC, has said it is combining online media skills with traditional art.

Sarah Ellis is director of digital development at the RSC. She told Reuters news agency that the company is doing its research and development right now. "If we look at what the pandemic did," it broke open the future, she said.

Ellis noted that digital tools have helped reach a lot of people around the world and this creates many possibilities.

Public opinion research by the RSC during the coronavirus health crisis found that people were willing to pay for digital performances. And people said they were willing to watch the shows online even when theaters reopened. 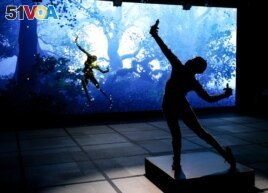 Theaters work hard to bring to life the tension of a story on stage.

That used to mean employing costly technical crews. But a few months before the pandemic brought restrictions, a valuable piece of equipment became available.

The device is known as a switcher. One switcher causing excitement right now is the ATEM Mini. It costs just $295. This switcher is produced by Blackmagic Design, an Australian company that has worked with the RSC. Blackmagic has also provided technology for the movie "Avatar" and the series "Game of Thrones."

The device lets a video recording switch between up to four different cameras. That means a single performance can have the many different camera angles seen in movies and television shows. It also permits quick editing, so performances can be shared quickly online.

He said when he first got into the industry, businesspeople were controlling everything. Creative people were being excluded from decision-making. "I just felt that was wrong," he said, adding, if the equipment was less costly, it would "empower creative people."

Rising from the ruins

Theatre Charlotte is a small theater that has used the switcher. It has streamed shows to people across the United States and Canada.

Acting Executive Director Chris Timmons said the company has rediscovered that theater is more than just a building. He expects to keep streaming even after Theatre Charlotte rebuilds next year.

And he said he can imagine a younger generation less interested in the traditions of pre-performance dinners and after-show drinks. Timmons said there is surely room for both kinds of crowds.

Colvin Theater is a theater production group based in Grand Rapids, Michigan. Founder Cody Colvin says many productions lose money even when the economy is good and streaming can help that.

"We're going to hit a point where selling tickets is not going to pay the bills anymore," he said.

Theater will become like sports and humor shows, where there will be a live crowd paying a lot of money to go to the event, he said. And then it will be broadcast online for people who want to pay less. He said that is the only way to grow.

The live experience will still be hard to beat, however.

Neil Darlison is director of theater at Arts Council England, a government arts agency in Britain. He said the council supports the use of digital tools to reach more people. But the desire for live theater is still strong.

Darlison said he does not think streaming is going to be as much of a problem for live theater as it may be for films or music shows. What sets theater apart is "the collective experience," he said, which is much harder to reproduce digitally.

opportunity –n. an amount of time or a situation in which something can be done; a chance to do or gain something

stream –v. to play continuously as data is sent to a computer over the internet

screen –n. the flat part of a television or computer that shows images or text

stage –n. a raised structure in a theater or similar building where performers stand

angle –n. the position from which something is looked at; for example, a camera angle

edit –v. to prepare a film, recording, photography or other work by changing, moving or removing parts

bill –n. a document stating how much is owed for goods or services