Teen Vaping on the Rise in US, Canada

Update Required To play the media you will need to either update your browser to a recent version or update your Flash plugin.
By Jonathan Evans
13 July, 2019


A new study says more American and Canadian teenagers are vaping than ever before. Vapes are electronic devices that heat liquid into a cloud of vapor that users inhale. Most users vape with a liquid that includes the drug nicotine, several other chemicals and flavoring.

The researchers examined data on smoking and vaping by young people in Canada, England and the U.S. They found that between 2017 and 2018, the number of 16- to 19-year-olds who reported vaping in the past 30 days rose by almost 50% in the U.S. The number almost doubled in Canada.

Researchers say the availability of vapes with more nicotine may be responsible for increased usage. 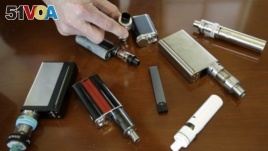 David Hammond, with the University of Waterloo in Canada, led the study. He said in an email that "2018 marked the point at which new vaping technology started to take over the market, led by JUUL."

JUUL vapes went on the market in 2015. The researchers noted that the company now commands more than half the vape market. JUUL became available in Britain in July 2018 and in Canada in September 2018.

Teen use of JUUL vapes increased in all three countries during the study period. The percentage of U.S. teens who reported using JUUL products regularly between 2017 and 2018 increased from 1% to 4.5%.

Hammond said many young people think vaping is not harmful and do not know the nicotine levels of vaping products. He added, "Parents and kids should know that these products are capable of producing addiction and may have long term health risks...."

In an emailed statement, JUUL said, "We don't want any non-nicotine users to use our products, especially youth." The company said it had taken aggressive action in the U.S. and Canada to fight underage use of its products.

Linda Bauld is the head of public health at the College of Medicine and Veterinary Medicine at the University of Edinburgh in Scotland. She says parents should talk to their children about the dangers of smoking and vaping.

She told Reuters in an email that "parents should explain that vaping products are for adult smokers trying to quit, not teenagers who have never smoked."

Bauld added, "Vaping is less harmful than smoking, that's why it is a good option for adult smokers. But that doesn't mean that it is risk free and it is better for teenagers to use nothing - no vaping, no smoking."

Lisa Rapaport reported this story for the Reuters news service. Jonathan Evans adapted it for Learning English. Caty Weaver was the editor.

flavoring – n. a substance that is added to a food or drink to give it a desired taste

option – n. something that can be chosen; a choice or possibility

vaping – v. to draw in and exhale the vapor from an e-cigarette or similar device for marijuana