Update Required To play the media you will need to either update your browser to a recent version or update your Flash plugin.
By Ashley Thompson
04 December 2021

The EIU released the results of its yearly "Worldwide Cost of Living Index" on Wednesday. The index is created by comparing prices in U.S. dollars for goods and services in 173 cities. The EIU uses 400 individual prices across 200 products and services to decide the world's costliest and least costly places. 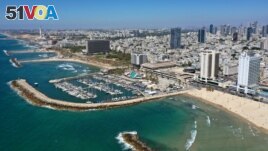 It is the first time Tel Aviv has held the index's highest position. Last year, it was in the sixth position. The Israeli city climbed the rankings partly because of the strength of its national money, the shekel, against the dollar. Other reasons were increases in prices for transportation and food.

Singapore and Paris came in tied for second, followed by the Swiss city of Zurich and Hong Kong. Another Swiss city, Geneva, came in seventh.

The rest of the top 10 costliest cities were Copenhagen, Denmark; Los Angeles, California; and Osaka, Japan.

This year's data was collected in August and September as prices for goods rose. The EIU found that, on average, prices rose 3.5 percent in local currency terms. That is the fastest inflation rate recorded over the past five years.

Social restrictions due to the COVID-19 pandemic "have disrupted the supply of goods, leading to shortages and higher prices," said Upasana Dutt. She is head of worldwide cost of living at the EIU.

"We can clearly see the impact in this year's index," Dutt added.

The average inflation number does not include four cities with exceptionally high rates. Those cities are Caracas, Venezuela; Damascus, Syria; Buenos Aires, Argentina; and Tehran, Iran.

Damascus was ranked the world's least costly city to live in.

Tehran, Iran's capital, rose from 79th to 29th in the rankings this year. The sharp rise -- the biggest of any city -- is due to financial punishments by the United States. Those sanctions have led to higher prices and caused shortages.

Rome, Italy saw the biggest drop in the rankings. It fell from 32nd place last year to 48th place this year.

The Agence France-Presse wrote this story. Ashley Thompson adapted it for VOA Learning English. Susan Shand was the editor.

currency - n. the money that a country uses

disrupt - v. to cause (something) to be unable to continue in the normal way