Update Required To play the media you will need to either update your browser to a recent version or update your Flash plugin.
By Jonathan Evans
22 April 2020


Two retirees in the United States have found ten apple varieties that many scientists thought had died out.

The apples once identified as "lost" were among hundreds of fruits collected last autumn in Idaho and Washington state. The discovery represents the largest number ever found in a single season by a not-for-profit group called the Lost Apple Project. 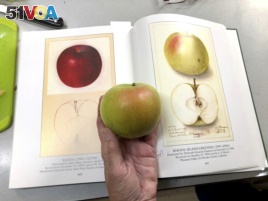 In this Oct. 30, 2019, photo, Joanie Cooper, of the Temperate Orchard Conservancy, compares a rare apple to a 1908 watercolor illustration of the same variety in a U.S. Department of Agriculture book, as she works in her lab in Molalla, Oregon. The apple is a Rhode Island Greening, a heritage variety that was once popular but has now become extremely rare in the U.S. Cooper and her colleagues have helped identify many of the 13 "lost" apple varieties that have been rediscovered in recent years by the Lost Apple Project in eastern Washington and northern Idaho. (AP Photo/Gillian Flaccus)

The group has just two members: EJ Brandt and David Benscoter. The two learned about the results of their hard work from experts at the Temperate Orchard Conservancy in Oregon, where all the apples were sent for study.

Brandt described the recent results as "almost unbelievable." He added, "I don't know how we're going to keep up with that."

Each autumn, Brandt and Benscoter spend many hours searching for old — and often dying — apple trees across the Pacific Northwest. The two travel by truck, all-terrain vehicle and by foot. They collect hundreds of apples from fields where apple trees once grew. They find these orchards by using old maps, newspaper stories and sales records.

By connecting names from those records with property maps, Brandt and Benscoter can find where an apple orchard might have been. They often find a few trees still growing there. The two carefully note the placement of each tree using global positioning system technology. They then tie a piece of plastic around the tress, collect some apples and ship them to the Oregon experts for identification.

In the winter, the two men return to the trees — often in bad weather — to take wood cuttings. These cuttings can be put, or "grafted," onto roots to make new trees.

The work is difficult. North America once had 17,000 named varieties of apples, but only about 4,500 are known to exist today.

With the 10 latest varieties identified, Brandt and Benscoter have rediscovered a total of 23 varieties. The latest finds include the Sary Sinap, an ancient apple from Turkey; the Streaked Pippin, which may have grown in New York as early as 1744; and the Butter Sweet of Pennsylvania, a variety that was first noted in Illinois in 1901.

Botanists from the Temperate Orchard Society compared the collected apples to watercolor images created by the U.S. Department of Agriculture in the 1800s and early 1900s. They also studied written descriptions in old botany books, some of them more than 150 years old.

One apple, the Gold Ridge, was hard to identify because the experts could not find any paintings or descriptions of it anywhere. Finally, botanist Joanie Cooper found it in a book written by a botanist who died in 1912.

"It's the luck of the draw," said Shaun Shepherd, another Temperate Orchard Conservancy botanist. "And we learn more as we go along."

With spring returning to the Pacific Northwest, the Lost Apple Project will soon enter its busy season. As they wait, Brandt and Benscoter are busy grafting wood cuttings from the newly discovered "lost" apple trees onto root stocks and updating their records from the last season.

Their nonprofit group took a major hit when they had to cancel two events: an annual fair where they sell newly grafted "lost" apple trees and a class on how to graft wood to grow a new apple tree.

The cancellations were due to the new coronavirus.

The two events raise much of the group's $10,000 yearly budget. The money goes toward travel costs, apple shipping and apple identification.

Benscoter said, "Two months ago, I was thinking: ‘This is going to be great. We've got 10 varieties that have been rediscovered,' but .... right now, we couldn't pay our bills."

Still, the self-described apple detectives get pleasure in their work. They often imagine the lives of the people who planted these trees.

"It was a hard life. I can't even imagine what they went through, but they survived and they went on with their lives," Brandt said. "It's hard now, too, but it's going to be OK. It's all a part of life."

Gillian Flaccus reported on this story for the Associated Press. John Russell adapted it for VOA Learning English. George Grow was the editor.

conservancy – n. a group concerned with the protection of nature or wildlife

botanist – n. A scientist who is a specialist in plant biology

update – v. to make something more modern or up to date

detective – n. a person whose job is to investigate and solve crimes

bill – n. an amount of money owed for services or goods purchased