Update Required To play the media you will need to either update your browser to a recent version or update your Flash plugin.
By Dan Novak
05 January 2022


The world's top tennis player Novak Djokovic has been denied entry to Australia over an issue with his visa.

The Australian Border Force said in a statement on Thursday, "The ABF can confirm that Mr. Djokovic failed to provide appropriate evidence to meet the entry requirements to Australia, and his visa has been subsequently canceled." Djokovic's lawyers told Australian media that Djokovic would fight the decision.

Djokovic arrived in Melbourne, Australia at about 11:30 local time on Wednesday evening to compete in the Australian Open tournament. 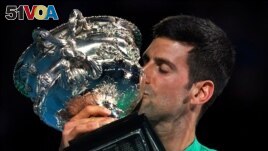 Djokovic had said earlier on Tuesday that he received a medical exemption from Australia's vaccine requirement. However, his team applied for a visa that does not permit entry for medical exemptions.

Djokovic's father told Serbian media that his son was kept waiting alone in a room at the airport. He said there were armed guards outside while his son was waiting for a decision on whether he could enter the country.

Serbian President Aleksandar Vucic wrote on Twitter that he spoke with Djokovic on the phone. He said, "I told our Novak that the whole of Serbia is with him and that our bodies are doing everything to see that the harassment of the world's best tennis player is brought to an end immediately."

The local government of Victoria, the state where the Open is played, said it would not support Djokovic's application. The decision rested with the federal government and Prime Minister Scott Morrison.

Morrison had already suggested Djokovic may not be approved to play in the tournament. Morrison said he would need approval from the federal government, which has responsibility for international borders and visas.

Morrison said earlier there would be "no special rules" for Djokovic on his exemption. "If that evidence is insufficient, then he won't be treated any different to anyone else and he'll be on the next plane home," Morrison told reporters.

Chasing record at the Open

The Australian Open starts on January 17. The tournament is one of the four major tennis tournaments in the world known as the Grand Slam. Djokovic has won the last three played at the Melbourne Park tennis center. He is now trying to win a record 21 Grand Slam titles to pass Rafael Nadal and Roger Federer.

The tournament organizer Tennis Australia requires everyone at Melbourne Park to be vaccinated or have an exemption given by a group of medical experts.

Djokovic's announcement that he had received a medical exemption to play angered many Australians. In total, the country has spent the longest time in lockdown in the world. There are a record number of cases in Australia now because of the Omicron variant of the virus.

Australia has one of the world's strictest visa policies when it comes to COVID-19 vaccines. Djokovic has never said whether he has or will receive a COVID-19 vaccine. But applying for the exemption would suggest that he has not.

Tennis Australia and government officials said Djokovic, who has said he is opposed to COVID-19 vaccinations, had received no special treatment.

Rod Laver is a famous former Australian tennis player. He told News Corp. that many Australians might think, "'Yes I'd love to see him play and compete but at the same time, there's a right way and a wrong way.'"

"Yes, you're a great player and you've performed and won so many tournaments, so it can't be physical. So what is the problem?"

With the exemption, Djokovic will not be required to quarantine. He will have the same freedoms in Melbourne as someone who is vaccinated.

Craig Tiley is the head of Tennis Australia. He said the experts that gave Djokovic the exemption were made up of immunology and infectious disease doctors. He said Djokovic met the requirements set by the Australian Technical Advisory Group on Immunization.

"We completely understand...people being upset about the fact that Novak has come in because of his statements over the past couple of years around vaccination," he said.

subsequently –adv. happening or coming after something else

tournament— n. a sports competition or series of contests that involves many players or teams and that usually continues for at least several days

apply –v. to formally or officially ask for something, such as membership in an organization or to be admitted into a group or a country

title— n. position of being the champion in a sport or other competition

lockdown – n. an emergency in which people are not permitted to freely move about an area because of danger

harassment –n. the state of being bothered by someone in a constant or repeated way

insufficient — adj. not having or providing enough of what is needed