Update Required To play the media you will need to either update your browser to a recent version or update your Flash plugin.
By Dan Friedell
17 January 2022


Novak Djokovic will not compete in this year's Australian Open after the country's immigration minister took away his visa. He is back in his home country of Serbia for the time being.

He was sent back to Europe because Australia has banned unvaccinated visitors. A similar rule in France could prevent him from playing in the French Open in May.

A group of fans greeted Djokovic with friendly signs and Serbian flags at the airport in Belgrade on Monday. One sign said: "God bless you, Novak." 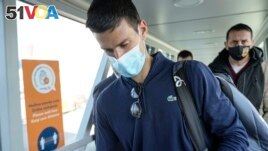 The Australian Open is the first big tennis tournament of the year. It is one of the four "Grand Slam" events. The next Grand Slam is the French Open in May.

Djokovic is currently in a three-way tie for Grand Slam wins with Spain's Rafael Nadal and Roger Federer of Switzerland. He needs to win one more to break the record.

A member of the French Parliament said a new law is set to be in place by May that would prevent unvaccinated visitors from participating in public events or even going to cafes and restaurants.

The French sports minister said visitors who come for vacation or to play sports will need to show proof of their vaccination against COVID-19. The law is not yet in place and some final points need to be decided. One could be how France will deal with people who recently recovered from COVID-19. The other question is whether the law might change by May if the virus that causes COVID-19 is not spreading as it is now.

Alexander Zverev is one of the top tennis players in the world. He won his first match at the Australian Open on Monday. Zverev said he is glad to know the French Open's position on vaccines ahead of time.

Djokovic traveled to Australia earlier in January because tournament organizers gave him permission to play even without being vaccinated. When he arrived in Australia, however, he was sent to a hotel for unvaccinated visitors while judges and immigration administrators decided his case.

Djokovic's next tournament is likely to be in Dubai in February. Organizers there say players will need to show a negative virus test before being permitted to enter the United Arab Emirates.

The Grand Slam in England is Wimbledon. The organization that runs that tournament has not yet presented a rule for players. As of now, people without a COVID-19 vaccine can travel to England. But if they do, they are required to quarantine, meaning they must stay by themselves for 10 days.

The last Grand Slam of the year is the U.S. Open. It starts in late August. Djokovic may have trouble getting into the U.S. for that tournament because foreign visitors must show proof of vaccination before being permitted in.

Do you think Novak Djokovic will be able to win his record-breaking Grand Slam? Write to us in the Comments Section and visit 51VOA.COM.

negative – adj. not showing the presence of a particular germ, condition, or substance