Tennis Stars Struggle with Quarantine ahead of Australian Open

Update Required To play the media you will need to either update your browser to a recent version or update your Flash plugin.
By Dan Friedell
19 January 2021


The 2020 Australian Open was one of the year's few international sporting events not changed by the coronavirus pandemic.

The tournament took place in January 2020, before international travel was shut down. The winners were Novak Djokovic and Sofia Kenin.

But this year's tournament is already very different. First, it has been delayed by about a month because of travel restrictions related to the pandemic. It is now set to begin on February 8.

Players arrived in Australia recently and some of them were on an airplane with passengers who tested positive for the coronavirus. Because of this, 72 players are now required to complete a 14-day quarantine and are not even permitted to leave their hotel rooms.

One of those players is 2016 champion Angelique Kerber. She recently had to celebrate her birthday in quarantine. In the past, she spent birthdays in Australia celebrating with tournament organizers after her matches. This year, she had to accept a message posted on social media by Australian Open organizers to mark the day.

The 72 players restricted to their hotels cannot leave to practice. That means they must try to find ways to stay fit inside their rooms. Some of them are hitting tennis balls against the walls and windows.

Other players are facing a different set of restrictions. They are inside a so-called bubble and are permitted to practice outside their rooms for up to five hours a day. But they cannot mix with people who are not part of the tournament. 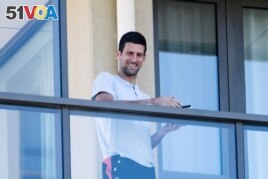 Tennis star Novak Djokovic stands on his balcony at the accommodation where he is quarantining in advance of the Australian Open to be played in Melbourne, in North Adelaide, Australia, January 19, 2021. (AAP Image/Morgan Sette via REUTERS)

In Adelaide, South Australia, players including Serena Williams, Naomi Osaka, Djokovic and Rafael Nadal are able to play outside.

Some of the players stuck inside their rooms have expressed frustration about their situation. They say they were not fully aware of the quarantine rules when they boarded their flights to Australia.

Australia has done a much better job of limiting the spread of the coronavirus than many other countries. Aside from an outbreak three months ago, the country has kept the number of sick people very low. Just over 900 people have died.

Daniel Andrews is head of Australia's Victoria state, where the tournament takes place in the city of Melbourne. He told The Associated Press the country's strong policies will not change just to make famous tennis players feel better.

"There's been a bit of chatter from a number of players about the rules. Well, the rules apply to them as they apply to everybody else, and they were all briefed on that before they came and that was a condition on which they came."

Australia did, however, decide to open its borders to the tennis players in the first place. About 1,200 people made the trip, including coaches, tournament workers and media representatives.

Three people on a flight from Los Angeles, California to Australia tested positive for the coronavirus. Those people are staying in a special hotel.

None of the players have tested positive for the coronavirus since they arrived.

Local officials have promised "zero tolerance" for anyone violating the quarantine rules. That means players are exercising in their hotel rooms until the two-week quarantine ends.

Craig Tiley is the tournament director. He said he hopes those players will be able to do their best in a "tough situation."

"We've got to do whatever we can to make it as fair as possible."

John Pye wrote this story for The Associated Press. Dan Friedell adapted it for Learning English. Bryan Lynn was the editor.

positive- adj. in a medical test, positive means the person being tested has a disease or condition

quarantine- n. the period of time during which a person or animal that has a disease or that might have a disease is kept away from others to prevent the disease from spreading

frustration- n. the feeling of being annoyed or upset because things are not happening the way you want them to

chatter- n. casual talk that is usually not important or interesting

coach- n. a person who teaches and trains an athlete or performer

zero tolerance- n. a policy of giving the most severe punishment possible to every person who commits a crime or breaks a rule

tough- adj. very difficult to do or deal with

What do you think of the tennis players exercising in their hotel room? We want to hear from you. Write to us in the Comments Section.