Tension Grows Between Turkey and the Netherlands

Update Required To play the media you will need to either update your browser to a recent version or update your Flash plugin.
By Phil Dierking
13 March, 2017


Turkey protested the Netherlands' refusal to allow its officials to enter the country as tensions grew between the two European Union nations.

Turkey said the Netherlands police used "disproportionate" force against Turkish protestors. And its president, Erdogan said, "Nazism is alive in the West" and promised to retaliate. 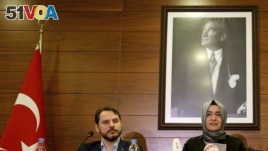 Fatma Betul Sayan Kaya, Turkey's Minister of Family Affairs, and Berat Albayrak, Energy Minister and son-in-law of President Erdogan, speak to the media at Ataturk Airport after her return to Turkey, in Istanbul, March 12, 2017.

After the heated exchange, European Union leaders asked Turkey to avoid statements or actions that worsen the situation. EU spokesman Margaritis Schinas said it was essential to find ways to calm the situation.

German Chancellor Angela Merkel, speaking at a news conference in Munich on Monday, said the Nazi comments were "completely unacceptable." She also urged Turkey to "calm down."

NATO Secretary General Jens Stoltenberg urged all members of the alliance "to show mutual respect, to be calm and have a measured approach."

The Netherlands, meanwhile, issued a travel advisory to their citizens to "be alert and avoid gatherings and busy places throughout Turkey."

The conflict between the two countries comes as the Netherlands is preparing for its own general election on Wednesday.

In this election, the right-wing PVV party of Prime Minister Mark Rutte will be competing against the far-right, anti-Islam populist Geert Wilders' party. Wilders has recently said the Netherlands government should block Turkish ministers from the country until after the election.

The Associated Press reported this story. Phil Dierking adapted it for Learning English. Hai Do was the editor.

What do you think about the Netherlands actions? We want to hear from you. Write to us in the Comments Section or on 51VOA.COM.

disproportionate – adj. having or showing a difference that is not fair, reasonable, or expected

Nazism – n. ideology of Nazis, which wants to use power to control and harm other people especially because of their race, religion, etc.

populist – adj. of or relating to a political party that claims to represent ordinary people

referendum – n. an event in which the people of a county, state, etc., vote for or against a law that deals with a specific issue.

retaliate – v. to do something bad to someone who has hurt you or treated you badly