Tensions Remain in Mixed City of Arabs and Jews

Update Required To play the media you will need to either update your browser to a recent version or update your Flash plugin.
By Dan Novak
11 June 2021


Israel and Hamas recently reached an agreement to end 11 days of fighting in the Gaza Strip. But tension remains in Israel's mixed Jewish-Arab cities.

In Lod, Israeli security forces continue to guard the city weeks after rioters set fire to police cars, synagogues and homes. Attackers also killed an Arab and a Jew in the city.

Lod is about 16 kilometers southeast of Tel Aviv. About a third of the city's 77,000 people are Arab. Many of them descended from Palestinians that previously formed the majority of the city. In 1948, Arabs were expelled during the war around Israel's creation.

The working-class city is also a center of nationalist Jewish politics. In the March 23 election, nationalist parties, including Prime Minister Benjamin Netanyahu's Likud party, won more than 60 percent of the vote in Lod.

Any tensions between Jews and Arabs were mostly below the surface—until last month. Some Arabs were driven to protest in the streets of Lod after fighting between Jerusalem police and Palestinians near the Al-Aqsa Mosque.

On the night that war began between Israel and Hamas, an Arab man was shot by a Jewish resident of Lod. The shooting set off more than a week of violence and the city was placed under a state of emergency. Similar unrest quickly spread to other mixed cities in Israel.

Arabs make up about 20 percent of Israel's population. As citizens, they have the right to vote. But they have long suffered from discrimination. And their communities often have high crime, violence and poverty. They largely identify with Palestinians, leading many Israelis to mistrust them.

In Lod, two residents were killed: Musa Hassuna, 32, by a suspected Jewish attacker, and Yigal Yehoshua, 56, by a suspected group of Arab attackers. No arrests have been made and police say they are still investigating. 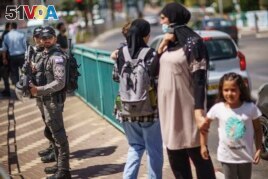 Police stand by during a demonstration calling for justice in the killing of Musa Hassuna in the mixed Arab-Jewish town of Lod, central Israel, Friday, May 28, 2021. (AP Photo/David Goldman)

Some Arab residents of Lod point to the election of Mayor Yair Revivo eight years ago as a turning point in Arab-Jewish relations. Revivo has close ties with a religious nationalist movement called the "Torah Nucleus."

Before the rioting, Revivo called "Arab crime" a "threat to the state of Israel."

"Jewish criminals have a drop of compassion. Arab criminals, you don't understand, don't have any inhibitions," he said on a radio show in December.

Ruth Lewin-Chen is with the Abraham Initiatives, a nonprofit group in Lod that supports coexistence between Jews and Arabs. She says the Arab population is concerned with the lack of effective policing, housing and planning policies. They are also worried about the growing power of Torah Nucleus.

Torah Nucleus has ties with the West Bank settler movement. During the riots, Arabs targeted property belonging to the religious-nationalist community. In return, armed West Bank settlers and other nationalists went to Lod to start more violence.

There are many signs of division. The town's community center has separate exercise and music classes for Arabs and Jews.

Rivi Abramowitz is a Jewish resident of Lod. She lives in the mostly Arab neighborhood of Ramat Eshkol. She says she has kind relations with her Arab neighbors. But she thinks there are limits to how far things can go. Jews and Arabs should "live together, but separately," she said.

Malek Hassuna is the father of the Arab killed in the unrest. He stood by his son's grave, which sits near burial places for generations of his family in Lod.

Hassuna said he hopes his grandchildren will live in peace with their Jewish neighbors.

Ilan Ben Zion and David Goldman reported this story for The Associated Press. Dan Novak adapted it for VOA Learning English. Hai Do was the editor.

synagogue — n. a building that is used for Jewish religious services

mosque — n. a building that is used for Muslim religious services

descendant – n. someone who is related to a person or group of people who lived in the past

compassion — n. a feeling of wanting to help someone who is sick, hungry, in trouble, etc.

inhibition — n. a nervous feeling that prevents you from expressing your thoughts, emotions, or desires

coexist — v. to exist together or at the same time

grave — n. a hole in the ground for burying a dead body