Update Required To play the media you will need to either update your browser to a recent version or update your Flash plugin.
By Christopher Jones-Cruise
21 June, 2017


How national leaders react to crisis can influence the rest of their term in office.

Leaders may be forced from office early if the public is critical of, or questions the effectiveness of, their reaction.

People are interested not only in whether a leader will work to fix what went wrong, but also whether he or she inspired the nation at a difficult time. 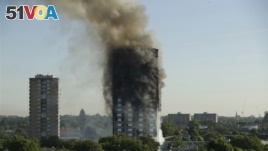 In this June 14, 2017 file photo, smoke rises from a 24-story high-rise apartment building on fire in London.

In Britain, many people are now asking that question of Prime Minister Theresa May. They have been critiquing her reaction to a major fire last week. The fire destroyed a high-rise apartment building in London. Officials believe at least 79 people were killed. Many others are missing. Hundreds have no place to live.

May has been dealing with terrorist attacks in addition to the fire. Some of her critics say she has seemed cold and unfeeling. They criticize her for failing to quickly visit victims and survivors of the terror attacks and deadly fire.

May's aides say the criticism is unfair. But even British newspapers that support her Conservative Party have turned critical. Writer Simon Heffer criticized May's "robotic" performance and her "complete failure to connect with the public."

In Western countries, people are quick to criticize national leaders for how they react to crises or disasters. Many people do not trust politicians anymore and are ready to follow leaders who have no political experience but offer simple answers.

Some observers say Europe's leaders are being tested. And they say how these leaders deal with the effects of disaster is either helping them suppress populist anger, redirect it or be destroyed by it.

Last week, The Economist magazine noted a weakness in Britain's political leaders, both conservative and liberal. Part of the problem, the magazine suggested, is that many politicians are "professionals who make their livelihood out of politics." It noted that earlier leaders had a wide experience of life before entering politics.

May is not the only European leader who has been criticized for her reaction to crises. Francois Hollande, the former president of France, left office with the lowest popularity ratings for a French leader since researchers first studied French politicians more than 30 years ago.

But if national leaders react as people believe they should, a crisis may not hurt them. In 2016, Italian Prime Minister Matteo Renzi was praised for his government's reaction to earthquakes in central Italy. The quakes killed almost 300 people. Renzi quickly put in place new building rules to make structures safer. And he quickly visited the area, talking with workers, survivors and family members of the dead.

Italy's La Stampa newspaper said Renzi "has understood more than anyone that this earthquake involves him and exposes him personally. The quake calls for a strong demonstration of leadership."

Experts say national leaders must react within hours of a terror attack or a disaster. They say leaders should release statements and help people deal with mourning -- in addition to supervising the problem.

May seems to have listened to the criticism. After an attack in March on London's Westminster Bridge, she did not communicate for six hours. But on Monday, she released a statement within four hours of an attack that targeted Muslims. She also spoke to the country on television and visited an Islamic center to meet with Muslim leaders.

Jamie Dettmer wrote this story for VOANews. Christopher Jones-Cruise adapted his report for Learning English. George Grow was the editor.

inspire – v. to cause someone to have (a feeling or emotion)

professional – n. someone who has a lot of experience or skill in a particular job or activity; someone who engages in an activity full-time or for many years