Update Required To play the media you will need to either update your browser to a recent version or update your Flash plugin.
By Bruce Alpert
16 January, 2016

They said 126 hostages -- some wounded -- were rescued Saturday at the Splendid Hotel in Ouagadougou. Islamic jihadists were also killed during the fight between terrorists and government forces. 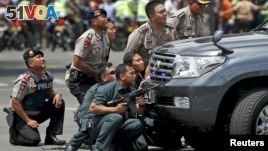 Police officers react near the site of a blast in Jakarta, Indonesia, January 14, 2016. Several explosions went off and gunfire broke out in the center of the Indonesian capital on Thursday and police said they suspected suicide bombers were responsible. Reuters/Darren Whiteside

The Islamic State terror group took credit for the attacks in Istanbul and Jakarta, Indonesia. The attacks left 10 German travelers dead in Istanbul, and seven dead, in Jakarta. That included five attackers.

The goal of the terror groups is to generate fear across the globe. The attack in Indonesia is a big display that the Islamic State has expanded to Indonesia. Indonesia is the largest Muslim country.

However, the bombings there could have been worse. Indonesian officials said a large bomb and five smaller devices did not explode. Officials said that showed attackers wanted to cause more destruction than they did, like the Paris attacks in November 2015 that killed 130.

"This act is clearly aimed at disturbing public order and spreading terror among people," the president said. "The state, the nation, and the people should not be afraid of, or be defeated, by such terror acts."

The terrorists targeted areas in Istanbul and Jakarta that are popular with Western tourists. There are two likely reasons. One, to kill Westerners. And two, to discourage travel. That would hurt their economies.

James Gelvin, co-director of UCLA's Center for Near Eastern Studies, told VOA that Turkey was chosen because it is close to the Syrian border. Also, he said, Turkey backs U.S. military operations against the Islamic State, and recently joined the fight.

The Islamic State terror group has recruited Indonesians who speak Malay. They are brought to Raqqa, Syria, to train for terror activities. Raqqa is the unofficial capital city of the IS terror group, said Gelvin.

"ISIS was interested in using them not only as fighters, but to attract more Indonesians to their territory," Gelvin said.

Debate on approach to combat IS

In his State of the Union address, President Barack Obama defended his balanced approach to the Islamic State fight.

"Priority No. 1 is protecting the American people and going after terrorist networks," Obama said. "Both al Qaeda and now ISIL pose a direct threat to our people, because in today's world, even a handful of terrorists who place no value on human life, including their own, can do a lot of damage. ... We have to take them out," he said.

"But as we focus on destroying ISIL, over-the-top claims that this is World War III just play into their hands. Masses of fighters on the back of pickup trucks, twisted souls plotting in apartments or garages -- they pose an enormous danger to civilians; they have to be stopped. But they do not threaten our national existence," he said.

Republicans say the president's strategy is not working. They point to a growing number of deadly Islamic State attacks, including the killing last year of 14 by two IS terror group sympathizers in San Bernardino, California.

In addition to the attacks in Turkey and Indonesia, the Islamic State took credit for these other attacks during the first two weeks of 2016:

Bruce Alpert researched and wrote this story for VOA Learning English. Kathleen Struck was the editor.

display -- v. to put something where people can see or notice it.

generate – v. to produce or cause something to be produced

disturbing -- v. to worry or upset someone

discourage – v. to make someone less determined, hopeful, or confident

recruit – v. to find suitable people and get them to join their cause or group

pose – v. to create a problem or threat

handful – n. an amount that you can hold in your hand

strategy – n. a plan or method for achieving a particular goal

sympathizer – n. a person who feels or shows support for or approval of something

abstract – adj. relating to or involving general ideas or qualities rather than specifics