Update Required To play the media you will need to either update your browser to a recent version or update your Flash plugin.
By VOA
31 December, 2015


Here are some of the top news stories of 2015. The year was marked by violence, with continued civil war in Syria, worldwide terrorism and mass shootings in the United States.

On November 13, terrorists carried out a series of attacks across Paris. The attacks killed 130 people and injured more than 300 people. The dead included an English teacher, a yoga instructor, musicians, a television editor, students, lawyers, bankers, architects, a retired limousine driver and a production manager at a Paris theater.

The youngest victim was Lola Ouzounian, 17, of Armenia. The oldest was Jean-Jacques Amiot, 68, who retired from his printing business. 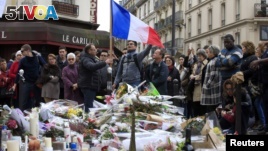 People pay tribute to victims outside Le Carillon restaurant, one of the attack sites in Paris, November 16, 2015. REUTERS/Pascal Rossignol

It was the second attack in the French capital linked to Islamic State militants. Earlier in the year, heavily armed gunmen killed 12 people at the Paris offices of Charlie Hebdo, a satirical magazine.

In 2015, terrorists also launched attacks around the world, from Africa and the Middle East to Southeast Asia.

The civil war in Syria started in 2011 with protests against the government of President Bashar al-Assad. The UN says more than 250,000 Syrians have lost their lives in this war.

Others fled to neighboring countries, leading to a refugee crisis in Europe. Syrian army soldiers and civilians inspect the site of two bombings in the Syrian city of Homs, in this photo provided by the state-owned Syrian Arab News Agency (SANA), Dec. 28, 2015.

The United States has launched airstrikes against the Islamic State as well as targets linked to the Assad government.

Russia and Iran have supported Assad's forces during the war. After the bombing of an airliner in Egypt, Russia promised to attack the Islamic State for its role in the bombing that killed many Russians.

An average of one mass shooting happened every day in the U.S. in 2015, the New York Times reported.

The deadliest mass shooting in 2015 happened on December 2 in San Bernardino, California. Syed Rizwan Farook and his wife, Tashfeen Malik, shot and killed 14 people and injured 22 others. 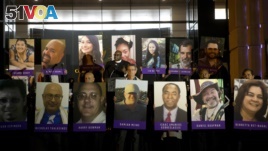 The attack took place at a holiday party for a local government agency. Farook worked at the agency. Police killed both Farook and Malik in a shootout.

The U.S. Federal Bureau of Investigations said both Farook and Malik had been radicalized. The FBI considered the shooting an act of terrorism.

Other major mass shootings took place in a South Carolina church, a community college in Oregon, and a health care facility in Colorado.

On June 17, an armed 21-year-old man walked into an African-American church in Charleston, South Carolina, and killed nine people, including the pastor. Police say the gunman told them he hoped the attack would lead to a "race war" in America.

On October 1, a 26-year-old man shot and killed nine people at Umpqua Community College in Oregon. He killed himself as police arrived. Friends and neighbors said the man collected firearms and liked to wear military clothing.

Dear later pleaded guilty to the shootings. In court, he called himself a "warrior for babies."

They called for changes to current laws that permit people to purchase guns without a background check. They also want to bar people on the U.S. government's "No Fly List" from buying guns. The list contains names of people suspected of having connections to terrorist groups.

Representatives from nearly 200 nations ratified a new climate change agreement on December 12 in Paris, France. It calls for countries to reduce their greenhouse gas emissions.

President Barack Obama said the agreement is a "turning point for the world."

The agreement is not guaranteed. Nations must provide the money and regulations to reduce pollution.

Both the United States and China, the world's biggest polluters, support the new climate agreement.

The leader of the Roman Catholic Church, Pope Francis, made historic visits to Africa, the United States and Cuba in 2015. 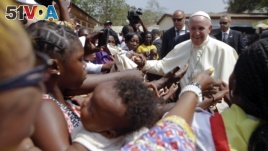 Pope Francis is cheered by locals as he visits a refugee camp, in Bangui, Central African Republic, Nov. 29, 2015.

The visits were major events. But, the Pope's public statements also made news.

The Pope continued his call for compassion and help for the poor. He said urgent action was needed on the issue of climate change. Pope Francis also asked for tolerance of people and causes that did not agree with the Catholic Church.

On homosexuality, considered a "sin" by the Catholic Church, the Pope continued to ask for love and tolerance. He did not, however, change the Church's position on same-sex marriage.

On April 25, an earthquake struck the small Himalayan country of Nepal.

The earthquake left hundreds of thousands of people homeless. It destroyed many historic buildings, including some World Heritage sites in the Kathmandhu Valley.

Relationships between Police and Minorities

Relations between police and communities in some U.S. cities grew tense 2015. They protested police killings of African-Americans.

Deadly force is the main issue. Police often face split-second decisions about whether a person presents a serious threat.

Police advocacy groups have said even a short delay in firing a weapon can lead to the death of a police officer or others. Groups protesting the shooting of civilians have said police take lethal action too often. They also say that those who are shot are often African-American.

The United States will not elect a president until November 2016. But the presidential race is already underway.

Hillary Clinton, a former U.S. Senator and Secretary of State, is favored to win the Democratic Party nomination. But she faces a challenge from Senator Bernie Sanders of Vermont.

A large number of Republican Party candidates are still in the race. Donald Trump and Senator Ted Cruz of Texas are among the leading candidates.

A main issue in the campaign is U.S. immigration policy, especially the proposed plan to receive Syrian refugees. Trump has called for a temporary ban of Muslim immigrants. He has also called for expelling the estimated 11 million undocumented immigrants.

satire - n. using humor to show that someone or something is bad; satirical - adj.

radicalized – adj. to cause someone to become more radical, especially in politics

compassion – n. not as important or valuable as something else

tolerance – n. willingness to accept feelings, habits, or beliefs that are different from your own

advocacy – n. the act or process of supporting a cause or proposals

renewed – adj. to do something again