Update Required To play the media you will need to either update your browser to a recent version or update your Flash plugin.
By Bruce Alpert
28 January, 2016


A Texas grand jury decided this week to clear the health care organization Planned Parenthood of charges that it sells body parts from aborted fetuses. The decision has angered those who oppose abortion.

Planned Parenthood and their supporters have said the video showed no illegal or unethical behavior. 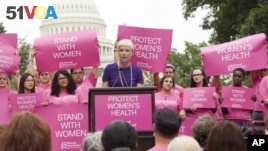 Planned Parenthood President Cecile Richards at a rally last year to defend the organization from charges it was selling fetal material. (AP)

David Daleiden is one of the two people charged. The 27-year-old is the director of the anti-abortion group, Center for Medical Progress. He was charged with damaging a government record, because he allegedly created a fake driver's license. He was also charged with illegally purchasing human organs. In the video, Daleiden posed as a medical research employee interested in buying fetal tissue.

Another Center for Medical Progress employee, Sandra Merritt, was also charged with damaging a government record.

The grand jury's decision came after months of emotional debate, followed by the group's release of its secret videotapes last summer.

After the secret videos were released to the public, Planned Parenthood apologized for the casual way in which an employee discussed the transfer of fetal tissue and body parts.

But the organization said the discussion centered on fees to cover Planned Parenthood costs, not profits. And it said the employee believed she was discussing a transfer with a real medical research company.

Planned Parenthood said the grand jury's decision showed the charges against it were false.

"These anti-abortion extremists spent three years creating a fake company, creating fake identities, lying, and breaking the law," said Eric Ferrero, a Planned Parenthood vice president. "When they couldn't find any improper or illegal activity, they made it up."

Daleiden, the director of the Center for Medical Progress, defended his actions.

"The Center for Medical Progress uses the same undercover techniques that investigative journalists have used for decades in exercising our First Amendment rights of freedom of speech and the press, and follows all applicable laws," he said.

Melissa Hamilton is a legal scholar at the University of Texas. She explains the reasons for the charges both Daleiden and Merrit face.

"If you are purporting to use a driver's license, which is a public record, that is beyond the pale -- because there are reasons for society to want to protect the legitimacy of purported government records."

Supporters and opponents of abortion rights had different reactions to the grand jury's decision.

Greg Abbot is the Governor of Texas, and a Republican who opposes abortion.

He said, "Nothing about today's announcement in Harris County impacts the state's ongoing investigation. The State of Texas will continue to protect life, and I will continue to support legislation prohibiting the sale or transfer of fetal tissue."

"The Texas grand jury decision undercuts the entire Republican attack on Planned Parenthood," Sanders said. "Planned Parenthood is doing an excellent job and should be supported and expanded, not defunded."

Greg Flakus reported on this story from Houston, Texas. Bruce Alpert adapted this story for Learning English. Ashley Thompson was the editor.

pose – v. to pretend to be (someone or something) in order to deceive people

casual – adj. done without much thought, effort, or concern

journalist – n. a person who writes for newspapers or magazines or prepares news to be broadcast on radio or television.

purport – v. to claim to be or do a particular thing when this claim may not be true

pale – (n). an area or the limits within which one is protected

prohibit – v. to order people not to use or do something

transfer – v. to move something from one place to another

undercut – v. to show a position or point of view is not correct