Update Required To play the media you will need to either update your browser to a recent version or update your Flash plugin.
By VOA
16 October, 2014


A top official of the Texas health care group that treated Ebola patient Thomas Eric Duncan said Thursday "we made mistakes." Dr. Daniel Varga said the group was "deeply sorry" that it did not identify the virus when Mr. Duncan first sought treatment. And, he said there had been no Ebola training for hospital staff before Mr. Duncan was admitted.

Dr. Varga's prepared statement was presented to U.S. lawmakers during a hearing about Ebola. U.S. health officials also testified about how to identify and control the virus.

Two Texas health care workers who treated Mr. Duncan are also infected with the Ebola virus. One of them, Nina Pham is to be flown to the National Institutes of Health isolation unit in Bethesda, Maryland. The other, Amber Vinson, was flown out of Dallas Wednesday. She is being treated at Emory University Hospital in Atlanta, Georgia. In August, that hospital successfully treated two other Americans with Ebola. 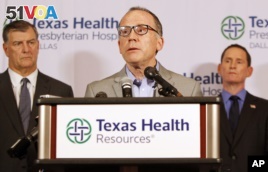 A human rights group said more than 600 people have been killed in the month-long battle for the town of Kobani, along Syria's border with Turkey. The British-based Syrian Observatory for Human Rights reported Thursday that 374 of the dead were Islamic State militants.

It said 258 Kurdish fighters and 10 supporters were also killed along with 20 civilians. The group said it believes the total number of deaths may be two times higher. It said both the Islamic State and Kurdish forces are extremely secretive about casualties.

Ukrainian and Russian Leaders Expected to talk at Meeting

The two-day European Union-Asia leaders meeting is taking place in Milan, Italy. European Council president Herman Van Rompuy opened the meeting. He said the crisis in Ukraine was affecting the security of the continent. During the meeting, Mr. Putin is expected to hold talks with Ukrainian President Petro Poroshenko.

The EU and the United States have enforced sanctions against Russia for annexing Crimea and supporting rebels in Ukraine. Russia denies aiding the rebels and has enforced its own sanctions.

Hong Kong leader Leung Chun-ying says he is looking for ways to continue talks aimed at ending pro-democracy protests. Such talks could begin as early as next week. Mr. Leung spoke to reporters in the Chinese territory Thursday.

He said that he could not change Beijing's decision in August to choose candidates in the 2017 Hong Kong chief executive elections.

isolation unit - n. an area in a hospital designed to care for patients infected with a contagious disease

casualty - n. a person killed or injured in a war or accident.

sanction - n. a threatened penalty for disobeying a law or rule.

annex - v. to add (an area or region) to a country, state, etc.: to take control of (a territory or place)