Update Required To play the media you will need to either update your browser to a recent version or update your Flash plugin.
By Ashley Thompson
28 August, 2018


The owner of a Texas company that makes 3D printed guns said Tuesday that he is selling the printing plans through his website.

A federal court order bars him from posting the plans online.

The owner, Cody Wilson, told reporters he started selling the plans Tuesday morning. He said he had already received 400 orders. He also said he will sell the plans to anyone in the United States for as little as one cent. 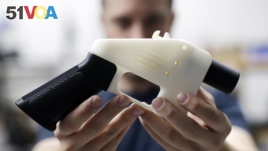 In this Aug. 1, 2018, file photo, Cody Wilson, with Defense Distributed, holds a 3D-printed gun called the Liberator at his shop in Austin, Texas.

"Anyone who wants to get these files is going to get them," Wilson said. "They can just name their price."

Wilson said some of his customers will be mailed a computer device that contains the printing plans. Others will receive the plans by email or some other secure download method.

Some people have paid for the plans with cryptocurrency, he said.

Wilson first used a website to publish designs for a printable handgun in 2013. But the U.S. State Department soon ordered him to stop, saying the designs violated laws related to weapons exports.

This summer, the two parties reached a settlement that would permit Wilson's company, Defense Distributed, to post the designs. Shortly after, 19 American states and the District of Columbia sued the U.S. government, seeking to cancel that settlement.

The states argued that online access to plastic handguns would create a security risk, especially if criminals or terrorists gain access to the gun-making plans. Plastic guns can go through metal detectors without being found.

In July, a U.S. District Judge in Seattle, Robert Lasnik, temporarily banned Defense Distributed from posting the plans online. That ban was to end Tuesday.

On Monday, however, Lasnik extended the ban. He said the "undetectable nature of these small firearms" makes them especially dangerous.

Wilson said he believes the ruling still permits him to sell the printing plans.

"I'm following yesterday's orders that direct me to sell the files," Wilson said.

He said, "I trust the federal government will hold Cody Wilson...accountable to that law. If they don't, President Trump will be responsible for anyone who is hurt or killed as a result of these weapons."

Wilson said he believes he could have begun selling the printing plans earlier. He said he chose not to because he wanted to be able to post them online for wider availability.

"For many years I chose not to sell these files," Wilson said. "I don't expect to make money on it."

3D (three-dimensional) - n. having or seeming to have length, width, and depth

cryptocurrency - n. a money that only exists electronically

detector - n. a device that can tell if a substance or object is present

accountable - adj. required to be responsible for something