Update Required To play the media you will need to either update your browser to a recent version or update your Flash plugin.
By Christopher Jones-Cruise
10 November, 2016


Rice farmers in Thailand are facing a large drop in income because of the drop in the price of rice throughout Asia.

At the same time, costs to grow the crop are increasing. Farmers are not sure who to ask for help. Many of them are struggling this year. Some of them may not even make enough money to pay their production costs.

Experts say the government's rice storage plan is a short-term answer. It is similar to a plan put in place by then-Prime Minister Yingluck Shinawatra. Because of the failure of that plan, the military ousted the prime minister and fined her over $1 billion.

About 40 percent of the Thai workforce has agricultural jobs.

Lung Chai is a rice farmer in Chiang Mai.

He says the situation has affected all farmers. He says he is losing money, but does not know who to talk to about it. "No one would hear our voice," he said.

Thailand faces strong competition for rice exports from India and Vietnam. This is partly because of lower pay in neighboring countries and large expected harvests this year.

A recent study paid for by the Bank of Thailand said Thai farmers should grow crops in addition to rice. It also said farmers should be trained to help predict market changes.

Singhachai Boonyayotin is a senior director of the Bank of Thailand.

He said Thailand should produce products other than white rice to compete with Vietnam and Cambodia. 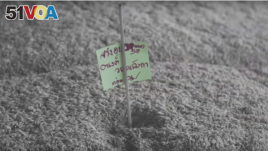 Thai rice at a farm

Wachirajak Nin-khuntod wanted to help his father who is a rice farmer. He began packaging his crops and selling them on the internet as a way to increase income.

He said, "My parents didn't believe at first that I would be able to sell rice on social media, because most farmers believe we can sell rice to the middleman or rice mill company only."

Now, he says, his parents know that they can sell their own rice without a middleman.

package – v. the act of process of putting something in a package or container

middleman – n. a person or company that buys goods from a producer and sells them to someone else