Update Required To play the media you will need to either update your browser to a recent version or update your Flash plugin.
By VOA
21 July, 2014

From the VOA Learning English, this is the Agriculture Report.

The military government of Thailand is ending payments to rice farmers to support the price of their crop. The policy was put in place by the civilian government ousted recently by the military. Officials are investigating charges of corruption and the possible loss of billions of dollars.

The military government says different measures are needed to increase agricultural development and support farmers. The rice support program was one of the most important policies of the government of ousted Prime Minister Yingluck Shinawatra. It helped her party win the 2011 election. 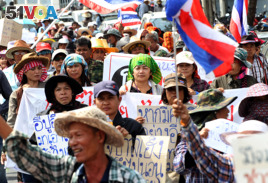 FILE - Thai farmers march through the street during a rally to put pressure on the Office of the Anti-Corruption Commission in Bangkok, Thailand, Feb. 7, 2014.

Under the policy, the government paid farmers 50 percent more than world market rice prices. The government said because Thailand was then the largest exporter of rice, it could use its power to increase the price of rice around the world.

But problems affected the program, which cost more than $19 billion. India became the world's largest rice exporter. The Thai government angered people by refusing to release information about the payments. And the program failed.

Thailand was not able to force an increase in the price of rice, and millions of tons of rice are now in storage buildings. Reports say 18 million tons of rice are being stored in Thailand, that is twice as many as normal levels.

The payments to rice farmers ended last year. Hundreds of thousands of farmers were not paid. Reports said about 20 farmers killed themselves because of financial problems. Others protested, gathering on the streets of the capital Bangkok to demand payments. In March, the government tried to make money by selling rice on the world market at lower prices.

David Dawe is a senior economist at the Food and Agriculture Organization -- a United Nations agency.

"One of the ways that they were raising money is they realized that they were going to have to sell some of the huge stocks that they had. They just couldn't continue to borrow money and sit on all these stocks and so they just started selling stocks," Dawe said.

There is some good news. The U.S. Agriculture Department predicts Thailand will be the world's biggest exporter of rice by next year. The department says Thailand will export almost 10 million tons, that is the largest amount since the country exported 10.6 million tons in 2011.