Update Required To play the media you will need to either update your browser to a recent version or update your Flash plugin.
By Anna Matteo
14 September, 2016


An Asian chili sauce is winning over taste buds all over the United States.

Sriracha sauce now flavors many American-made products -- from popcorn to candy to beer. There are cookbooks explaining how to use the popular hot sauce.You can buy clothing decorated with the famous Sriracha rooster. Songs have been written about this hot sauce.

There is even a 2013 it documentary film, Sriracha, about the history of the spicy condiment.

Trailer of the film Sriracha.

Sales of Sriracha are greater than $80 million each year. This success has made Sriracha, named after a city on Thailand's coast, a household name in America. The popularity of Sriracha sauce is even more amazing considering the company that makes the sauce has never advertised.

The man who created Sriracha sauce is David Tran. He is an ethnic Chinese from Vietnam who immigrated to California. His sauce is made with red jalapeño peppers grown only on a farm in Southern California.

Tran's Sriracha sauce is hot on the tail of, meaning right behind, America's traditional best-selling spicy sauce, Tabasco. Tabasco has been sold for nearly 150 years. It is a Cajun-style pepper sauce that has more vinegar and is spicier than Tran's Sriracha sauce.

The hotness or spiciness of a sauce can be measured with something called the Scoville scale. The American Chemical Society tests and rates hot peppers. Tabasco is not only hotter but also five times more expensive than Tran's Sriracha sauce.

The Louisiana-based company that makes Tabasco, is now making its own "Premium Sriracha Sauce." 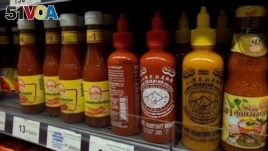 Other sauces now use the name "Sriracha" for their condiments.(Z. Aung/VOA)

In fact, large and small companies in the U.S. are using the "Sriracha" name on their own sauces. When David Tran made the sauce, he did not copyright the Sriracha name.

David Tran was a major in the South Vietnamese army. He created his first hot sauce in 1975. That year his country fell to the Communist North. Five years later, he began hand-bottling his new sauce for restaurants in the Chinatown area of Los Angeles, California.

"Sriracha" is a variation of the spelling of the Thai town of Si Racha. It is a seaside community on the east coast of the Gulf of Thailand and it is famous for its sauce.

Thai people can be confused and dissatisfied when they learn that a sauce with the name "Sriracha" is made 13,000 kilometers away in the United States.

When he saw the American sauce in the red bottle with a white rooster on it, one government officer in the city of Si Racha said, "What do you mean it's from America? Its name is Sriracha."

A Thai food writer in Thailand agreed. She said, "because of the name it's obvious that it should be from Thailand."

A VOA correspondent brought the American Sriracha sauce to a food market in Si Racha. Buyers and sellers there tasted the condiment, compared it to their local sauce and shared their opinions.

One woman who sells hot sauces said the American sauce is much "saltier and spicier" than the Thai sauce which is more "sweet and sour." She adds, however, that Si Racha sauce has to be produced in Si Racha.

Her adult daughter compared the Californian sauce to ketchup, a popular American condiment made from tomatoes, vinegar and spices. She adds that the Californian sauce is a better match for the meat dishes preferred by foreigners, such as steaks. Thais, she explained, prefer a thinner sauce to eat with their dry noodle dishes.

"Both are good," she adds, but the American kind is "too hot."

But there is one thing food-loving people in the Thai city of Si Racha agree on -- the foreign sauce widely known among Americans as "the rooster sauce" is making its own way in the food world.

"Oh yeah, Huy Fong Sriracha, oh yes siree. It's made in America, land of the free. Though it might look peculiar, don't let the bottle fool ya (you). It's Huy Fong the American garlic chili pepper sauce."

taste bud – n. one of many small spots on your tongue that give you the ability to taste things

flavor –v. to give or add taste to a food

condiment – n. something (such as salt, mustard, or ketchup) that is added to food to give it more flavor

household name – n. a person or thing whose name is very well-known

vinegar – n. a sour liquid that is used to flavor or preserve foods or to clean things

spicy (spicier) – adj. of food : flavored with or containing strong spices and especially ones that cause a burning feeling in your mouth

variation – n. something that is similar to something else but different in some way

confused – adj. being perplexed or disconcerted <the confused students>

dissatisfied – adj. not happy or pleased

sour – adj. of food : having an acid taste that is like the taste of a lemon