Update Required To play the media you will need to either update your browser to a recent version or update your Flash plugin.
By Bryan Lynn
12 August, 2016


The new constitution in Thailand will give the country's military more time to control the government until planned elections next year.

After the vote, Prime Minister Prayut Chan-o-cha, a former army chief, promised to hold general elections in November of 2017.

Thai voters also approved a proposal to let a military-appointed Senate choose a new prime minister after the elections next year. The Senate would have 250 members. They will include six military leaders and top defense officials for at least five years.

Thailand's 500-member House of Representatives will join with the Senate in choosing the prime minister. 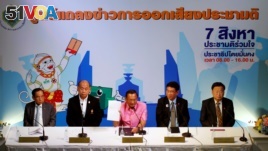 Thitinan Pongsudhirak teaches political science at Chulalongkorn University. He said the referendum results should not be seen as an endorsement for the military government.

"They (Thai citizens) are used to voting for individuals," he said. "So the overall result suggests that people want to have their say at the polls."

Thailand's last general election was held in 2011, when Pheu Thai Party leader Yingluck Shinawatra was elected prime minister. She and her government were ousted from power in 2014.

Prayut led the military coup. The elected Senate was dismissed after the military overthrow, which followed massive anti-government protests.

Leading up to the referendum, Yingluck and her party opposed the proposed constitution, as did Democrat Party leader Abhisit Vejjajiva. Human rights groups also opposed the measure.

Thailand's opposition leader and former Prime Minister Abhisit Vejjajiva speaks during a news conference at a hotel in Bangkok, May 3, 2014.

"In terms of the election law, bigger parties will lose," Glaser said. "We have a weak parliament consisting of weak politicians and political parties – which are highly fragmented – we will have a weak government too."

The latest constitution is the second to be written since the military took power in May 2014. The first one was voted down by the National Legislative Assembly last September.

Laws under the current interim constitution give the government of Prime Minister Prayut absolute power. The laws gives soldiers the power to make arrests and prevents political gatherings of more than five people. They also include restrictions on Thailand's media.

The new constitution gives the military continued powers while setting up a new government, including over national security.

Many observers believe the voters were willing to give the military this extended role to help achieve a peaceful transition to civilian rule.

Late in the week, attackers using firebombs and homemade explosives struck several cities across southern Thailand. The explosions killed at least four people and wounded more than 30 others, including foreigners. 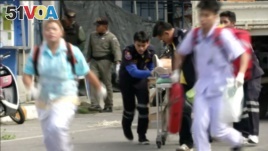 Rescuers and medical officers push an injured person on a gurney at the site of a bomb blast in Hua Hin, south of Bangkok, Thailand, in this still image taken from video, August 12, 2016.

A police spokesman Friday said police believe the attacks were the result of local sabotage, not the work of Islamic terrorists. For years, militants in the south have been fighting for greater self-rule.

Prime Minister Prayut called the bombings "an attempt to create chaos and confusion." He said the attacks came at a time when the country "is heading towards stability, a better economy and tourism."

"Who (did it)? Who doesn't want to see Thailand getting better? Which group? Go find out for me," he said.

Ron Corben reported this story for VOAnews. Bryan Lynn adapted it for Learning English. George Grow was the editor.

transition – n. change from one state or condition to another

sabotage – v. the act of intentionally destroying or damaging something