Update Required To play the media you will need to either update your browser to a recent version or update your Flash plugin.
By Bryan Lynn
29 November, 2016

The parliament acted after Thailand's cabinet named the prince to be the new king.

The president of the National Assembly, Pornpetch Wichitcholchai, officially nominated the prince. He urged legislators to "give their blessings" to the new king. Parliament members then stood up and replied, "Long live the king."

Thailand's King Bhumibol Adulyadej died last month at the age of 88. He was the world's longest serving monarch and served as king for 70 years.

The process for choosing a new king is described in a 1924 Thai law. The law gives the king power to choose who should succeed him. In 1972, Bhumibol chose Vajiralongkorn – his second child and only son - to be his successor. 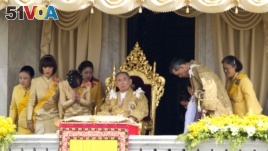 The last step is for the prince to meet with leaders of the National Assembly before being formally named king. Government officials said that meeting is expected to happen soon.

The 64-year-old prince spends much of his time outside Thailand. He is often in Germany, where he owns property.

The prince has yet to gain the same respect in Thailand as his father. King Bhumibol was greatly beloved across Thailand, a mainly Buddhist country. He was known as a humble leader who directed many social and economic development projects.

Prime Minister Prayuth Chan-ocha said shortly after Bhumibol's death, the prince told him he did not want to immediately become king. He said he needed more time to mourn his father.

The government declared a full year of mourning for all public offices after the king's death. Many Thais have dressed in black or white since then to honor him.

The king's remains have been on display at the Grand Palace in Bangkok so Thai people can pay their respects. His body will be cremated in a special ceremony likely to take place a year or more after his death.

The official coronation of Vajiralongkorn will happen after the cremation.

blessing – n. approval that allows something to go forward

monarch – n. a king or queen

humble – adj. not proud or believing you are important

coronation – n. a ceremony to officially crown a king or queen