"The Young and the Restless," "Days of Our Lives" and "Guiding Light." These are the names of three popular programs in the United States called "soap operas." A soap opera is a television or radio program that tells stories about the lives and problems of a group of people. They are popular in many countries, including Thailand.

Prayuth Chan-ocha is the head of government for Thailand. Recently, he said television soap operas in his country cause fighting, and divide Thai society. He wants scripts for the programs to tell about peaceful ends to conflict.

Prayuth Chan-ocha told reporters that he has named writers who will create scripts that tell about peace, tourism and Thai culture. He said if their scripts are not satisfactory, he will write them himself. 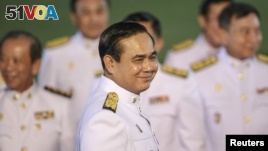 In this file photo, Thailand's Prime Minister Prayuth Chan-ocha and his cabinet complete a photo session after meeting with King Bhumibol Adulyadej in Bangkok September 4, 2014.

Soap operas in Thailand are very popular. Prayuth Chan-ocha says the current programs incite violence rather than peace. And some critics say the television dramas do not take social issues -- like rape and domestic violence -- seriously. Prayuth Chan-ocha said "in our country, television dramas make people fight and they create divisions. So we have much improvement to make in this area."

He said one of the stories being written for a new, more-peaceful soap opera will be about two foreign families who visit Thailand. "They meet each other and come to love each other," he says.

This is not the first time the prime minister has shown an interest in the arts. He wrote a song called "Return Happiness to Thailand." It is played by radio and television stations around the country.

Soap operas are not the only thing the prime minister has been thinking about. Recently, Thailand's military government approved a 250-member council to make political reforms and approve a new constitution. Prayuth Chan-ocha chose the members of the council himself. But he notes Thailand's king must approve the names. He says the council includes lawyers, researchers and members of social organizations.

The military government says Thailand must reform its political system. But it has not given details on what changes are needed and how they will be put in place.

Prayuth Chan-ocha became the leader of the Thai government in May. He replaced Yingluck Shinawatra, the first female head of government in Thailand, after she was ousted by the military. Ms. Shinawatra and supporters of her family fear any changes the new government might make will prevent them from regaining power.

Prayuth Chan-ocha says reforms are needed in 11 areas, including government administration, energy and justice. The council also plans to change the way elections are held in Thailand.

Any new laws must be approved by the National Legislative Assembly. Because most of the members of that group serve in the Thai military it is likely the assembly will quickly approve any laws written by the country's military leaders.

Prayuth Chan-ocha says elections will be held in late 2015. He says that gives lawmakers time to write a new constitution and make reforms.

council – n. a group of people who are chosen to make rules, laws, or decisions about something

reform – v. to make better by changing; to improve; n. a change to a better condition

script – n. the written form of a play, movie, or television show

soap opera – n. a television or radio program that has continuing stories about the daily lives and problems of a group of people