Update Required To play the media you will need to either update your browser to a recent version or update your Flash plugin.
By Caty Weaver
16 January, 2015


Thailand is reporting progress in efforts to end human trafficking and abuse of migrant workers. Thailand's government is taking steps after receiving criticism from rights groups and the United States.

In 2014, the United States government lowered Thailand's rating in its Trafficking in Persons Report. Researchers reported that Thailand showed few signs of improving its record on illegal labor and human trafficking – the trade in human beings.

Rights groups have protested labor abuses in many Thai industries, from fishing and manufacturing to farming. The groups say many foreigners are paid too little and expected to work long hours under threats of violence. 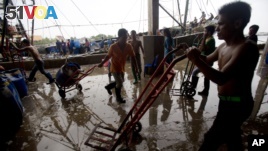 The U.S. report placed Thailand among the countries with the worst ratings. It could lead to actions against Thailand, including a suspension of assistance from financial organizations like the World Bank.

There are an estimated three million migrant workers in Thailand. Most of the immigrants are from Burma, Cambodia, Laos and Vietnam. The U.S. report said people from China, Russia, Uzbekistan, India and Fiji are also victims of human trafficking in Thailand. They are often enslaved in labor and the sex trade.

This week, the Thai Foreign Ministry released a report on the government's stronger legislation and new anti-trafficking measures.

Don Pramudwinai is the country's Deputy Foreign Minister. He says the new efforts marked progress in dealing with the issues of human trafficking. He spoke to reporters on Monday

"The past six months, there were tangible results...where there's amendments of the law and all the issues pertaining to the victims, and the enforcement as well. All these (are) genuine measures, that could be implemented in a very effective manner."

Measures include stronger rules to protect labor in the fishing industry, including requiring that each worker has a labor agreement. In the agriculture industry, workers now must be at least 15 years old.

The government says it reached out to civil society and non-government organizations to establish and supervise the policies.

Htoo Chit is a Burmese activist in Thailand's southern province of Phang Na. He leads an organization that campaigns for migrant labor rights. He says the group is working with the government on a pilot project in the fishing industry.

Htoo Chit says the policy marks an improvement, including registration of currently undocumented labor. But he says more needs to be done.

New government rules require all boats at sea to carry and use observation equipment by next month.

The Thai government says it has registered up to 1.6 million migrant workers who had never been registered before.

Kanchana Patachoke is a deputy director general with the Thai Foreign Ministry. She says Thailand is looking to improve its standing by meeting international protocols on human trafficking.

"Thailand is also working in good cooperation with international organizations and the United Nations, obligations that Thailand has to undertake under the UNTOC – or the UN Transnational Organized Crime Convention. And Thailand is also a party to the protocol on human trafficking or trafficking of migrants and we are considering acceding to the protocol on smuggling of migrants as well."

Phil Robertson is deputy director of Human Rights Watch Asia. He says the new policies are welcomed. But he says more needs to be done on enforcement, especially for the high-risk populations such as Muslim Rohingya from Myanmar and Bangladesh.

"We've seen time and time again promises made, commitments promulgated, promises to change laws, to change regulations but nothing gets done about impunity. The impunity to continue to traffic people, what's happening to the Rohingya, to migrants forced on to fishing boats raises serious suspicions that this is once again the Thai government's effort to talk themselves out of a problem."

The Thai government says it considers the efforts to stop human trafficking of top importance.

This story came from reporter Ron Corben in Bangkok. Caty Weaver wrote it for VOA Learning English. ­­­­­­­­­­­­­George Grow was the editor.

protocol – n. a system of rules that explain the correct behavior and methods to be followed in official situations

promulgate – v. to make (an idea, belief, etc.) known to many people

regulation – n. an official rule or law that says how something should be done