Update Required To play the media you will need to either update your browser to a recent version or update your Flash plugin.
By Christopher Jones-Cruise
20 May, 2017


The government of Thailand is considering measures to improve conditions in the troubled southern border provinces.

It hopes new policies, including increased security, can return confidence in the provinces' economies after a recent terrorist attack.

On May 9, a car bomb exploded near the Big C super store injuring at least 60 people.

No one was killed because security guards stopped cars from getting closer to the store. They had seen a small explosion and realized it was part of a larger attack.

Panitan said the store is being repaired and the government has sent representatives to the area "a few times" to help. Panitan expects that the store will reopen soon.

The store is the only one of its kind in the mostly Muslim Southern border provinces of Yala, Narathiwat and Pattani. About 1.8 million people live in the provinces. 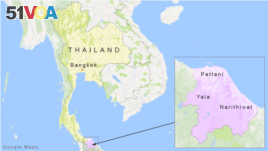 Anusak Suwanmongkol owns the CS Pattani Hotel, which has been targeted by terrorists. Anusak says the attack on the store hurt the area's economy.

Terrorists in Thailand's southern border provinces restarted attacks in 2004. Since then, almost 7,000 people have died although strong security measures have been put in place.

Most victims have been Muslim. The terrorists have attacked state schools and have murdered many teachers and state officials.

Thai security forces have also been accused of killings and torture by rights groups.

The violence has taken lives and hurt people's ability to make a living.

The National Economic and Social Development Board (NESDB) is a government research agency. It said in 2015 that people in the southern provinces have low incomes and the poverty rate is high at 33 percent.

The national poverty rate in Thailand is 7.2 percent.

Srisompob Jitiromsri is a political scientist at the Prince of Songkla University Pattani campus. He said years of conflict have harmed the economy.

"The problem of the violent situation and the lack of confidence is the investment from outside (of the region). It has a strong impact on the local economy. This is why we can see the poverty still high when compared with other regions," he said.

Many in the Buddhist minority population have fled. In 2003, the National Statistics Office said 22 percent of the population of the three provinces was Buddhist.

Srisompob says only about 10 percent is now Buddhist.

In April, the World Bank warned that the difference between the rich and poor was growing in Thailand, including the Southern provinces.

Since 2004, Thai leaders have put in place policies to increase incomes. They have been supported by non-governmental organizations and the United Nations.

But Anusak said only an end to violence will lead to a return of business confidence.

confidence – n. a feeling of trust in one's health or condition

supermarket – n. a store known for offering a large number of goods and services