The government in Thailand is looking to a major public works project to help the country's economy. The government plans to spend more than $100 billion on roads, bridges and other infrastructure. The program includes improvements to Thailand's national rail system and opening links to Southern China.

The Thai government plans to improve the national railway system after years of spending little on repairs. The goal is to re-establish Thailand's place in a trans-Asian railway network. The railway runs south to north, from Singapore to Kunming in southern China, and west to east, from Yangon in Myanmar to Ho Chi Minh City, Vietnam.

The spending program has been part of the government's effort to lift economic conditions after almost zero growth last year. Experts predict Thailand's economy will grow just over three percent in 2015. 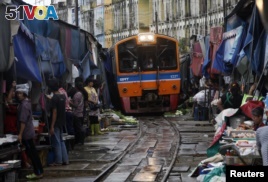 Thailand's government wants to upgrade the national rail system. Venders pull back awnings and vegetables as a train arrives in Maeklong, in Samut Songkhram province, Aug. 16, 2012.

The weak Thai economy and uncertain international markets have hurt exports. Exports have been a big part of the country's economic growth in recent years.

Thanomsiri Fongarunrung is an economist at Phatra Securities in Bangkok. She says government spending is needed now to improve the rail system. She says only the government can help the economy through infrastructure investments.

Recently, Thai officials met with representatives of the State Railway of Thailand, or SRT, to reform the government agency.

The earliest plans for national railway development date back to the 1990s. The former government of Prime Minister Yingluck Shinawatra had proposed a high speed rail line. But the new military-supported administration has other ideas. It wants to switch from high speed rail to a "double tracking" system. Having two tracks would enable trains to run in each direction on a separate rail line. It could also carry trains able to travel at speeds of up to 180 kilometers an hour.

Luxmon Attapich is an economist at the Asian Development Bank in Bangkok. She says given the economy's present weakness, infrastructure spending will help ‘jump start' growth.

"So investment in infrastructure is good in that sense. Investment in railway, again, if you come back to double track railway, all the feasibility studies have been done a long time ago. It is ready to go ahead, if the actual construction can go ahead this year, it will really help GDP (gross domestic product) this year."

A major link in the rail plan would connect the Thai town of Nong Khai to the industrial coastal area of Map Ta Phut in Rayong and nearby Bangkok.

Altogether, a rail network of six double tracks will cover just over 900 kilometers. It will cost more than $4 billion.

Some of the money for the project will come from China. China, Japan and South Korea have all said they want to work on the rail development program. But it was China that finally signed an agreement of understanding with Thailand, and will finance the new tracks. Thailand will operate the network and then will repay China.

The railway networks are in line with the long-standing plans to link China and Southeast Asia.

Political scientist Carl Thayer is with the University of New South Wales in Australia. He says the rail link extends China's reach into ASEAN -- the Association of South East Asian Nations.

"Thailand is part of ASEAN, which is promoting connectivity and that includes rail, most definitely, bridges, roads, etc., and China has been a massive supporter of that and because it serves the link to Yunnan, to link Southern China, the provinces of Southern China, to mainland South East Asia. China has developed that capability."

The move follows the establishment by China of an Asian Infrastructure Investment Bank in late 2014. The new bank includes member states of the 10-nation ASEAN group.

Words in this Story:

infrastructure - n. the basic equipment and structures (such as roads and bridges) that are needed for a country or area to operate

switch - v. to make a change from one thing to another

jump start - v. to give new energy to (something)

network - n. a system of lines or wires that are connected to each other

alternative - n. something that can be chosen instead of something else; a choice