Update Required To play the media you will need to either update your browser to a recent version or update your Flash plugin.
By Dan Friedell
22 November, 2016

The American Thanksgiving holiday is on Thursday. Many people will gather with family members for a big meal. It is a time to celebrate family, friends and everything there is to be thankful for.

The traditional Thanksgiving meal often involves cooking a large bird called a turkey, and many other foods such as stuffing, mashed potatoes and pumpkin pie. 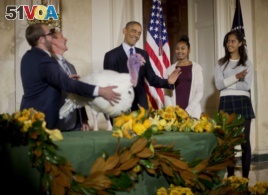 President Barack Obama, with daughters Malia, far right, and Sasha, carries on the Thanksgiving tradition of saving a turkey from the dinner table by "pardoning" a bird named Cheese' in the Grand Foyer of the White House, Nov. 26, 2014.

But some people do not look forward to spending a lot of time with their family. It can be stressful.

Family members can start arguments with each other. Some people at the meal may have conflicting political beliefs.

Conflict can even find its way into the kitchen, where all the cooking takes place.

There is a saying called "too many cooks in the kitchen," or "too many cooks spoil the broth." This means that, sometimes, if many people are involved in a project, it does not turn out as well as it could have if only one person were in charge.

That is why people are proposing Thanksgiving survival strategies using the hashtag #SurvivalGuideToThanksgiving (on Twitter.)

Rick Irwin had an idea. "Say that you're letting the dog out and use it as an excuse to disappear for several hours."

Tracy Brooks had a suggestion for limiting Thanksgiving dinner responsibilities. She wrote: "Be the last to arrive and the first to leave."

Since there is so much food at the Thanksgiving meal, Christine Turner suggested forgetting about your diet and wearing loose clothing.

But, one fitness enthusiast said people do not have to give up on their diets during the big meal. They can prepare foods that have fewer calories. For example, they could bake some foods instead of frying them in oil. They could also mash cauliflower instead of potatoes.

But other people are looking forward to the holiday.

Sara Marie Brenner wondered why people need to "survive" Thanksgiving, at all. She wrote: "I enjoy the holiday."

Do you have any suggestions for how to survive large family gatherings? We want to hear from you. Write to us in the Comments Section or on 51VOA.COM.

stuffing –n. a seasoned mixture often put inside a bird or other meat dish

broth –n. liquid in which food (such as meat) has been cooked

enthusiast –n. a person who feels enthusiasm, excitement or great interest in a subject