Update Required To play the media you will need to either update your browser to a recent version or update your Flash plugin.
By Caty Weaver
26 August 2022


Nepal's holiest river, the Bagmati, begins high in the Himalaya Mountains. It has been honored religiously since ancient times. Tradition says its waters have the power to purify souls.

But the Bagmati itself is polluted. Along its almost 600-kilometer path through forests, farmland, and towns, the Bagmati starts to darken with pollution. It is black and full of trash by the time it reaches Kathmandu, the capital.

The water is undrinkable. It is not useful for cleaning. During the dry season, a bad smell rises from the riverbed. 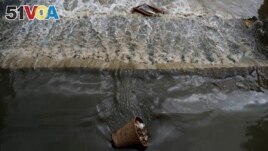 Today, the Bagmati is Nepal's most polluted river. The worsening conditions have sharply changed the way Kathmandu's three million people interact with the river.

In the capital, the Bagmati's waters travel slowly past several holy places, including the Pashupatinath Temple. It was declared a World Heritage Site by UNESCO in 1979. The huge complex honors the Hindu god Shiva, and other, lesser gods.

Hindus gather on the riverside in Kathmandu to worship at shrines and celebrate holidays, or festivals. Women enter the river to wash away sins during the Rishipanchami holiday. Visitors also get in the water during the festival of Chhath.

Families have long carried the bodies of loved ones who have died to the river to wash their feet and shake drops of water on their faces. Beliefs hold that the river washes away a person's wrongs and sends their soul to heaven. Later, the body is burned along the banks of the river and the ashes are thrown into the water.

People still bring the dead to the Bagmati, but few make contact with the water.

"That is no more now. The water is so dirty and stinks. People are forced to bring bottled water and do the rituals," said 59-year-old Mithu Lama. She has worked with her husband at the Teku ghat cremation grounds since she was 15.

People have also traditionally collected river water to use on their homes to purify them. The river is meaningful to Buddhists, as well. Many cremate bodies besides the Bagmati.

Born and raised next to the the river, Lama recalled using its waters for cooking, bathing, washing and even drinking. Today that feels like a long-ago dream ended by the dumping of human waste and trash.

"I now have serious doubt that it will be cleaned in my lifetime," Lama said. "Not that there has not been any efforts, there have been several cleaning campaigns, but there are more people dirtying it. People are the problem."

There have been efforts by both private volunteers and the government to clean up the river. For example, for the last seven years hundreds of volunteers have gathered in Kathmandu every Saturday to remove trash from the Bagmati.

Mala Kharel is among that crowd most Saturdays. She is an executive member of the governmental High Powered Committee for Integrated Development of the Bagmati Civilization. It was set up to help clean up the river. She volunteers her time to raise awareness among the population about avoiding pollution.

Kharel said the campaign has succeeded in collecting about 80 percent of the trash along the side of the river. The volunteers say they find trash, dead animals and even the bodies of babies. The cleanup effort is difficult and more needs to be done.

In addition, many thousands of people have built homes and shelters illegally along the river and refuse to leave.

As for the human waste, the committee is working on several projects including new canals and pipes alongside the river. Those are to connect to sewer lines to prevent waste from reaching the Bagmati.

The group also is considering a waste treatment plant. And it has started building new dams where rainwater can be captured during the monsoon season and released into the river during the dry months. This could help move waste downstream from Kathmandu.

Work on the pipe and canal system began around 2013, but no completion date has been announced. Building on two dams is continuing and reportedly close to completion. Another dam is getting started. But campaigners have high hopes.

"In the next 10 years, I am hoping the river will be flowing clear and the banks will be clean and lined with trees," Kharel said. "We are working hard with this target."

The hopefulness is not shared by everyone. Some environmentalists do not know if the dams will be of much help.

"There is too much expectations from these dams. Bagmati is a natural river and not a canal that can be cleaned so easily," said Madhukar Upadhya, a scientist who studies the river closely.

He said no sand is left. Today it is lined with clay and mixed with chemicals from industrial activity.

"So much damage has already been done to it," Upadhya said, "that it can perhaps be cleaned to some degree but not restored to its past glory."

The Associated Press reported this story as part of a series on holy rivers. Caty Weaver adapted it for VOA Learning English.

trash –n. things that are no longer useful or wanted and that have been thrown away

shrine –n. a place connected with a holy person or event where people go to worship

ritual –n. a formal ceremony or series of acts that is always performed in the same way

cremation –n. the process of burning the body of someone who has died

doubt –v. to not believe

awareness –n. to have knowledge of something

sewer –n. something that removes waste and water