The Berlin Wall: Memories of the Cold War’s Greatest Symbol

Update Required To play the media you will need to either update your browser to a recent version or update your Flash plugin.
By Mario Ritter Jr.
06 November, 2019


Sister Brigitte Queisser walks slowly along the wrecked remains of the Berlin Wall.

The wall here is slowly breaking down. Rusty metal is exposed where the concrete has crumbled away. 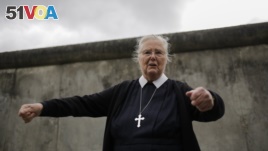 In this Sept. 18, 2019, photo, Sister Brigitte Queisser of the Lutheran Lazarus Order talks in front of concrete remains of the Berlin Wall during an interview with The Associated Press in Berlin

The 77-year-old Lutheran religious worker stops to catch her breath. She opens a gate and steps from what once was West Berlin into what used to be communist East Berlin.

What is a simple step today was a dangerous act for those who tried to escape East Berlin, then controlled by the Soviet Union.

The wall divided the city's west from its east. Many people attempted to cross it hoping to find freedom on the other side. Watchtowers and armed soldiers closely guarded the area. Some people who attempted to cross planned the act for months. Others tried with no planning at all.

Many succeeded. But Sister Brigitte, who is a deaconess of the Lutheran Lazarus Order, witnessed the results of failure.

Directly across from the wall, on Bernauer Street, her order ran a medical center that provided help to those who were injured trying to cross the barrier. The sisters also took care of burying those who died seeking freedom.

"Families were torn apart, people couldn't move freely from one neighborhood to the other anymore, many died trying to run away to the West," she said.

"It was a nightmare."

Remembering the cost of the Berlin Wall

Germany is preparing to celebrate the 30th anniversary of the fall of the Berlin Wall. The country also is remembering those who were arrested, injured or died as they tried to escape by tunneling under the wall, swimming past it or climbing or flying over it. Experts say about 140 people died trying to cross.

The first version of the Berlin Wall was built in 1961. East German leader Walter Ulbricht described it as an "anti-fascist protective wall" meant to keep his country secure. In reality, it was built to keep East German citizens from fleeing to the West.

For many, the wall was the front line and a symbol of the Cold War between the United States and the Soviet Union.

The Lazarus deaconesses were at the center of it all. Their living area and medical center on Bernauer Street were cut off from the order's cemetery by the wall itself.

"We took care of everybody in our first-aid station who was somehow injured," remembers 84-year-old Sister Christa Huebner. "Dead or alive, cut open...everything."

Many of the sisters worked as nurses in the hospital. From the windows that overlooked the wall, they saw many escapes.

"I saw young men jumping from the roofs on the other side into the nets of the West Berlin firefighters; other men roped down on clothes lines and came to us with their hands all bloody," Sister Christa said.

"But there were also those who weren't so lucky," she added. "We took care of those who died as well."

Because they were cut off from the order's own graveyard, the sisters had to find a different burial place.

Today, without the wall, the deaconesses can again reach their own cemetery and visit the burials of their sisters.

Sister Brigitte looks at the gravestones marking the burials of her late companions. The sounds of school and tourist groups visiting the remains of the wall can be heard from Bernauer Street, now a major tourist stop.

"I often thought, ‘God, can you please take away this wall,'" Sister Brigitte says. "When it finally happened, it was like a fulfillment — but at the same time, it was also beyond comprehension."

She added, "It was a miracle.

The Associated Press reported this story. Mario Ritter Jr. adapted it for VOA Learning English. Ashley Thompson was the editor.

order –n. a religious group whose members usually live together and promise to follow certain rules

deaconess –n. a woman in a Christian church who has special duties

symbol –n. an object that represents an idea

comprehension –n. ability to understand something

miracle –n. an unusual or wonderful event caused by God