The Cost of Doing Business

Update Required To play the media you will need to either update your browser to a recent version or update your Flash plugin.
By VOA
14 January, 2017

There are many special terms in the world of business. The following story is about a woman who has a business making signs. She tells us about a recent sweetheart deal. She made a deal with a friend, and they both made a profit.

Here is Faith Lapidus with that story. 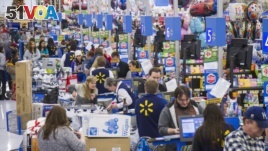 Sales clerks ring up customers at Walmart in Bentonville, Arkansas. More Americans work in retail and as cashiers than in any other occupations. (Photo by Gunnar Rathbun/Invision for Walmart/AP Images)

I had started a small company several years ago. I worked hard to make it successful. It was a sign-making business. It was a small company, not a blue chip company. It was not known nationally for the quality of its signs. It did not make millions of dollars in profits. And it was private. It was not a public company with shares traded on the stock market.

And that is the end of our business story. But even if you're not in business, some of these expressions can be used in other situations.

For example, you can cut corners or get a break anywhere. Let's say you are planning a party and don't have enough money. You might have to cut corners on the food you serve. Or you could get a break by winning $100 on free food at your local grocery store!

The expression black and white can also mean a very clear choice that leaves no confusion. Sometimes we use it in the negative. Politics, for example, is not as black and white as some people may think. There are often shades of gray when dealing with complicated political issues and how they affect government policy.

And that's all for this Words and Their Stories.

After listening to this story, you should strike while the iron is hot! While the expressions are still fresh in your mind, practice using them in a business conversation.