The Economy Shrinks with Shocking Speed

Update Required To play the media you will need to either update your browser to a recent version or update your Flash plugin.
By Susan Shand
24 March 2020


Three weeks ago, the car service company EmpireCLS was heading toward its second straight year of a growing business. Empire, based in New Jersey, could not find enough drivers and office workers to meet its needs.

Now, the company is on the edge of failure. 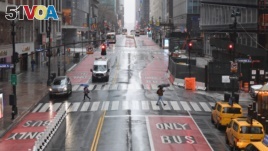 A usually busy 42nd Street is seen nearly empty on March 23, 2020 in New York City. The city, known as the center of finances, has the highest number of confirmed cases of COVID-19 in the United States. (Angela Weiss / AFP)

With extreme speed, business in the United States and around the world has collapsed in the face of the coronavirus. People are told to stay home. A car service like Empire is not needed.

The company has had a "90 percent revenue loss in three weeks," said company chief David Seelinger. "We've been through 9/11. We've seen recessions. We've never seen anything like this.''

Seelinger spent last Sunday telling 750 of his 900 employees they no longer had a job.

"It was the most difficult day of my career," he said.

Never before has the American economy come to such a sudden, violent stop. The fall has shocked Americans who had enjoyed more than 10 years of a growing job market and economy. Now, the economy is headed toward a deep recession. Millions of people will likely lose jobs within a few months.

"The economy has never gone from healthy to disaster so quickly," said Jason Furman. He was former President Barack Obama's top economic adviser and is now a professor at Harvard's Kennedy School.

"What would take years in a financial crisis has happened in days in this health crisis,'' Furman said.

Since the Great Recession ended in 2009, the economy has risen for 11 years. Yearly growth has been at about 2.3 percent since 2010. Employers have added positions for workers for the last nine years.

Just two weeks ago, the government released a great employment report: A gain of 273,000 jobs in February. The country was experiencing a 50-year low in the rate of unemployment: 3.5 percent.

People were buying goods, eating out and spending money in other ways, too. Things were great.

But all that went away after just a few weeks of the spread of the new coronavirus in America.

The investment bank and financial services company Goldman Sachs says it expects the economy to shrink at a 24 percent yearly rate between April to June. Days earlier, the company had predicted a drop of just five percent during the same period.

The information services company IHS Markit predicts 7 million job losses from April to June. It expects unemployment will rise to 8.8 percent in the final three months of 2020. Some economists say it will go even higher.

As investors began to understand the seriousness of the crisis, they began to sell. Since February 12, the Dow Jones Industrial Average has fallen 35 percent. The market events have sharply reduced family wealth and consumer confidence.

"I'm not sure that anyone honestly has any sense of how this... resolves," said Daniel Feldman. The former U.S. ambassador advises large international companies for a Washington, D.C.-based law firm.

Government officials are trying to help. The central bank has cut its main interest rate to almost zero. It is also trying to make certain that companies can use short-term credit so they can continue to pay employees. Congress and the White House are preparing a large stimulus program that includes giving money to citizens.

Economists do not usually recognize a recession until long after it has begun. Now, they can see it coming.

"Never...have I known the week a recession started," said Diane Swonk, chief economist at the company Grant Thornton. She says the downturn began in the first week of March as the economy all but stopped.

For now, some Americans are working from home and keeping their jobs. Some of them may be saving money, which will help the economy later, explained Scott Hoyt, an economist at Moody's Analytics.

Yet the future does not look promising. About 60 percent of American workers--82 million people--are paid by the hour. Most will not be paid if they cannot go to work.

revenue - n. the profits made from a business

stimulus - n. money distributed by government to help the economy

consumer confidence - n. the attitude of person about spending money at a particular time in the economy