The Effects of Bullying on Health

Update Required To play the media you will need to either update your browser to a recent version or update your Flash plugin.
By VOA
10 June, 2014

A popular expression goes, "What does not kill us makes us stronger." But when it comes to being bullied, that may not be the case.

Increasing evidence suggests that the effects of being bullied do not end with childhood. The psychological and physical damage, such as anxiety and depression, can continue into adulthood. 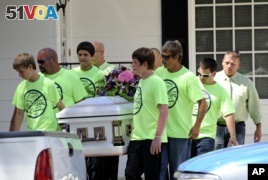 Pallbearers wearing anti-bullying t-shirts carry the casket of 12-year-old Rebecca Sedwick. Authorities believe she killed herself after being bullied. (2013)
A recent Duke University report shows that bullying can have permanent effects.

The report is based on research that began in 1993. The Great Smoky Mountains study observed 1,420 children from western North Carolina for years. The scientists followed the people as they went through childhood to teen years and into young adulthood.

The Great Smoky Mountains study also found something completely new about bullying. It seems that the bullies were healthier than the bullied – at least when talking about CRP levels. The study found that those subjects who had never been bullied, but had bullied others, had the lowest levels of CRP.

William Copeland led the study. He is a professor of psychiatry and behavioral sciences at Duke University Medical Center in North Carolina. He says a higher social standing for bullies might explain their lower CRP levels. 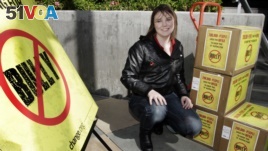 High school student Katy Butler poses with boxes containing more than 210,000 petition signatures for the Motion Picture Association of America (MPAA). She is asking them to lower the rating of the documentary "Bully" so that more kids can see it.
Experts on bullying worry about that message. Catherine Bradshaw is deputy director of the Johns Hopkins Center for the Prevention of Youth Violence in Baltimore, Maryland. She warns that lower CRP levels might just represent a difference in the bullies' basic biology. Ms. Bradshaw says that a health gain should not be understood as permission to bully.

Mr. Copeland says bullying is a serious childhood experience that is no longer found only at schools and on playgrounds. Online or cyberbullying can make even a child's home feel unsafe. Some children who are bullied have killed themselves. Sometimes bullies even kill their victims.

Mexico's president Enrique Pena Nieto is dealing with such a tragedy now. A 12-year old boy died last month a week after he was physically bullied at school.

The family of Hector Alejandro Mendez Ramirez say that bullies threw the boy into a wall. He died later of head injuries. Mr. Pena Nieto has sworn to fight bullying in Mexican schools.