'The Fall of the House of Usher,' by Edgar Allan Poe, Part One

Update Required To play the media you will need to either update your browser to a recent version or update your Flash plugin.
By VOA
06 May 2022


We present the first of three parts of the short story "The Fall of the House of Usher," by Edgar Allan Poe. The story was originally adapted and recorded by the U.S. Department of State.

It was a dark and soundless day near the end of the year, and clouds were hanging low in the heavens. All day I had been riding on horseback through country with little life or beauty; and in the early evening, I came within view of the House of Usher.

I do not know how it was — but, with my first sight of the building, a sense of heavy sadness filled my spirit. I looked at the scene before me — at the house itself — at the ground around it — at the cold stone walls of the building — at its empty eye-like windows — and at a few dead trees — I looked at this scene, I say, with a complete sadness of soul, which was no healthy, earthly feeling. There was a coldness, a sickening of the heart, in which I could discover nothing to lighten the weight I felt. What was it, I asked myself, what was it that was so fearful, so frightening in my view of the House of Usher? This was a question to which I could find no answer. 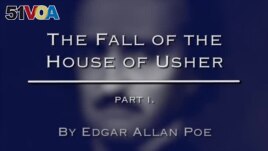 The Fall of the House of Usher by Edgar Allan Poe, Part 1

I stopped my horse beside the building, on the edge of a dark and quiet lake. There, I could see reflected in the water a clear picture of the dead trees, and of the house and its empty, eye-like windows. I was now going to spend several weeks in this house of sadness — this house of gloom. Its owner was named Roderick Usher. We had been friends when we were boys; but many years had passed since our last meeting. A letter from him had reached me; a wild letter, which demanded that I reply by coming to see him. He wrote of an illness of the body — of a sickness of the mind — and of a desire to see me — his best and, indeed, his only friend. It was the manner in which all this was said — it was the heart in it — which did not allow me to say no.

Although as boys we had been together, I really knew little about my friend. I knew, however, that his family, a very old one, had long been famous for its understanding of all the arts, and for many quiet acts of kindness to the poor. I had learned, too, that the family had never been a large one, with many branches. The name had passed always from father to son, and when people spoke of the "House of Usher," they included both the family and the family home.

I again looked up from the picture of the house reflected in the lake to the house itself. A strange idea grew in my mind — an idea so strange that I tell it only to show the force of the feelings which laid their weight on me. I really believed that around the whole house, and the ground around it, the air itself was different. It was not the air of heaven. It rose from the dead, decaying trees, from the gray walls, and the quiet lake. It was a sickly, unhealthy air that I could see, slow-moving, heavy, and gray.

Shaking off from my spirit what must have been a dream, I looked more carefully at the building itself. The most noticeable thing about it seemed to be its great age. None of the walls had fallen, yet the stones appeared to be in a condition of advanced decay. Perhaps the careful eye would have discovered the beginning of a break in the front of the building, a crack making its way from the top down the wall until it became lost in the dark waters of the lake.

I rode over a short bridge to the house. A man who worked in the house — a servant — took my horse, and I entered. Another servant, of quiet step, led me without a word through many dark turnings to the room of his master. Much that I met on the way added, I do not know how, to the strangeness of which I have already spoken. While the objects around me — the dark wall coverings, the blackness of the floors, and the things brought home from long forgotten wars — while these things were like the things I had known since I was a baby — while I admitted that all this was only what I had expected — I was still surprised at the strange ideas which grew in my mind from these simple things.

The room I came into was very large and high. The windows were high, and pointed at the top, and so far above the black floor that they were quite out of reach. Only a little light, red in color, made its way through the glass, and served to lighten the nearer and larger objects. My eyes, however, tried and failed to see into the far, high corners of the room. Dark coverings hung upon the walls. The many chairs and tables had been used for a long, long time. Books lay around the room, but could give it no sense of life. I felt sadness hanging over everything. No escape from this deep, cold gloom seemed possible.

As I entered the room, Usher stood up from where he had been lying and met me with a warmth, which at first I could not believe was real. A look, however, at his face told me that every word he spoke was true.

We sat down; and for some moments, while he said nothing, I looked at him with a feeling of sad surprise. Surely, no man had ever before changed as Roderick Usher had! Could this be the friend of my early years? It is true that his face had always been unusual. He had gray-white skin; eyes large and full of light; lips not bright in color, but of a beautiful shape; a well-shaped nose; hair of great softness — a face that was not easy to forget. And now the increase in this strangeness of his face had caused so great a change that I almost did not know him. The horrible white of his skin, and the strange light in his eyes, surprised me and even made me afraid. His hair had been allowed to grow, and in its softness it did not fall around his face, but seemed to lie upon the air. I could not, even with an effort, see in my friend the appearance of a simple human being.

In his manner, I saw at once, changes came and went; and I soon found that this resulted from his attempt to quiet a very great nervousness. I had indeed been prepared for something like this, partly by his letter and partly by remembering him as a boy. His actions were first too quick and then too quiet. Sometimes his voice, slow and trembling with fear, quickly changed to a strong, heavy, carefully spaced, too perfectly controlled manner. It was in this manner that he spoke of the purpose of my visit, of his desire to see me, and of the deep delight and strength he expected me to give him. He told me what he believed to be the nature of his illness. It was, he said, a family sickness, and one from which he could not hope to grow better — but it was, he added at once, only a nervous illness, which would without doubt soon pass away. It showed itself in a number of strange feelings. Some of these, as he told me of them, interested me but were beyond my understanding; perhaps the way in which he told me of them added to their strangeness. He suffered much from a sickly increase in the feeling of all his senses; he could eat only the most tasteless food; all flowers smelled too strongly for his nose; his eyes were hurt by even a little light; and there were few sounds which did not fill him with horror. A certain kind of sick fear was completely his master.

"I shall die," he said. "I shall die! I must die of this fool's sickness. In this way, this way and no other way, I shall be lost. I fear what will happen in the future, not for what happens, but for the result of what happens. I have, indeed, no fear of pain, but only fear of its result — of terror! I feel that my time will soon arrive when I must lose my life, and my mind, and my soul, together, in some last battle with that horrible enemy: fear!"

This lesson plan is based on the CALLA approach and teaches the learning strategy Make Associations.

Lesson Plan - 'The Fall of the House of Usher,' Part One

Now it's your turn to use the words in this story. How do you act when you see someone you have not seen in a long time? What is the best way to stay in contact with old friends? Let us know in the comments section or on 51VOA.COM.

the heavens - n. the sky

on horseback - n. sitting on a horse

reflect(ed) - v. to show the image of something on a surface

gloom - n. a feeling of sadness

branch(es) - n. a part of a tree that grows out from the trunk

decay(ing) - v. to be slowly destroyed by natural processes

lip(s) - n. either one of the two soft parts that surround the mouth