A Fish That 'Sings' Love Songs?

Update Required To play the media you will need to either update your browser to a recent version or update your Flash plugin.
By Anne Ball
09 October, 2016


This is the sound of a fish "singing:"

It is a male fish — a plainfin midshipman, to be exact — from the Pacific Ocean. He is singing, or humming, a love song to get female fish to come and visit the nest he built for their eggs.

Scientists have wanted to know why the male plainfin midshipman sings only at night. A study published in the journal Current Biology provides some answers.

Laboratory experiments showed that the fish's song, that low, fog-horn-like sound, is controlled partly by a hormone, melatonin.

Hormones are natural substances that influence how bodies grow or develop. In the human body, melatonin tells us when it is time to sleep.

Andrew Bass is a professor of neurobiology and behavior at Cornell University in New York State. For nearly 30 years, he has been studying the plainfin midshipman, and the sounds they make.

"It was always remarkable how right after nightfall, if you are recording from a bunch of nests in a bay, the bay just comes alive with this sound. It's like it suddenly turns on at night..."

Plainfin midshipmen are olive-brown in color. They grow to be up to 38 centimeters long.

The fish gets its name from rows of organs lined up on its underside. These rows are bio-luminescent. They produce light and shine in the water.

Long ago, people thought they looked like the buttons on navy clothes. 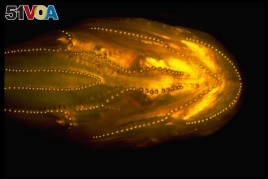 In the late spring and summer, the males move from waters deep in the ocean to more shallow waters close to land. There they build nests for females to leave their eggs under rocky shelters.

Then, during the night, the males produce their sounds. Often a group of them gather together and start humming.

But how do they make these sounds?

Unlike people speaking, or birds singing, you cannot see the fish making the sound. It comes from organs inside. Their gas-filled swim bladder and their vocal muscles help them sing.

Bass says the vocal muscles are hidden deep inside the fishes' bodies.

"And they contract those muscles at very high rates, and that vibrates the swim bladder, and that in turn generates a vibration in the surrounding water that makes the sound."

They can make that sound, non-stop, for hours at a time. But once a female arrives, mating begins, and she leaves her eggs, the male stops singing for the night. It is the male that then watches over the eggs until they hatch — and the young fish can swim on their own. 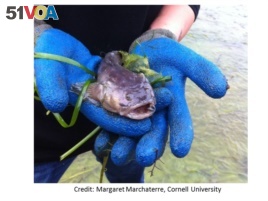 The fish experiments were done in a Cornell laboratory by then-student Ni Feng, who is now at Yale University. It was her idea to study how melatonin affects the fish. The researchers had no idea how the hormone might affect the fishes' ability to sing and hum.

All about the rhythm

The fish were kept in rooms where lighting could be controlled. When it was always dark, the fish hummed as they would at night. They followed their internal timing or circadian rhythm.

But in bright lighting, a condition that lowers melatonin production, humming was suppressed. When kept in normal light, but given a melatonin replacement, they continued to hum but at unpredictable times.

So unlike humans, and even birds, the melatonin did not put the fish to sleep. It had just the opposite effect.

"So here we study melatonin in our animal, right? And instead of suppressing calling, or putting them to sleep, essentially, it somewhat acts as a stimulant. Again, it's the "go" signal that says ok, make more hums..."

He says that by studying how different animals react to melatonin, researchers will get a better understanding of how it works.

"We will reveal very fundamental mechanisms of just how this hormone in fact controls daily sleep/wake cycles in all animals."

The hum of space aliens?

The midshipman fish are not the only ones making sounds. In fact, long ago, fishermen would listen carefully to hear where the fish were. Bass says he even found a report written in 1924 about the plainfin midshipman and how they hum at night.

In the 1980s, people living on houseboats along the California coast did not know what to make of those sounds. Bass said they thought the sound came from either an underwater power line, a nearby water treatment center, a U.S. Navy experiment, or maybe even beings from other planets.

The boat owners found out the sound was coming from the male midshipman, looking for love in the night.

Like whales and dolphins, other sea creatures, the midshipman fish make different kinds of sounds for social communication. For example, the sound they make when protecting their nests from possible invaders is different than the one they make when calling a mate.

Bass says that in the end, humans and other animals are similar in certain behaviors -- in this case, the ability to produce sounds. He says these fish, and the things he learns about them, never cease to amaze him.

Anne Ball reported this story for Learning English with information from Reuters News Service. George Grow was the editor.

nest – n. a place where an animal or insect lives and usually lays eggs or takes care of its young

bio-luminescent – adj. something that glows and produce light in the water

swim bladder – n. a gas-filled organ in fish that help them move up or down in the water

circadian rhythm – n. physical, mental and behavioral changes that follow a 24-hour cycle, mostly connected to light and darkness in an organism's environment

amaze – v. to surprise and sometimes confuse someone very much