‘The Harder They Fall’ Updates the Western Movie

Update Required To play the media you will need to either update your browser to a recent version or update your Flash plugin.
By Caty Weaver
24 October 2021

Those three words appear at the beginning of the new movie The Harder They Fall, directed by Briton Jeymes Samuel.

The story is fictional, or imaginary. But, the three words let watchers know that it is based on real people --- Black cowboys and Black families that populated the Old West. Hollywood has not made many movies about such people in the film genre known as Westerns.

Samuel is also a musician known as The Bullitts. He is a fan of the western genre. But, his movie adds unpredictable elements. The songs and music, or soundtrack, for the film has a modern edge. International music star Jay-Z led that effort as one of the producers of the film.

The Harder They Fall has received praise for its cinematography. And supporters of the movie say the actors, or cast, tell a story underrepresented in cinema.

The gun violence is the only part of the film that is usual. Westerns make shootings, bodies and blood a big part of the story. Some moviegoers might wish there were more discussion and less violence in this updated version of a western. But westerns are called "shoot-em-ups" for a reason. 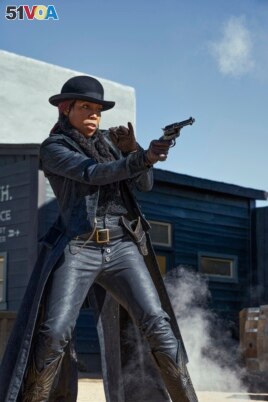 This image released by Netflix shows Regina King in a scene from 'The Harder They Fall.' (David Lee via AP)

The story begins with a scene of a clergyman and his family sharing a meal. A knock comes at the door, and Buck enters, his face hidden under a cloth. Soon the parents are shot dead and their young son is cut on the face. The wound is in the shape of a cross.

Years later, that boy — Love — is a known outlaw, part of a criminal group that robs other criminal groups. Rufus Buck is in prison, but Love learns he soon will be freed.

One scene shows a bank robbery in Maysville. It is a white town. But the whiteness goes beyond the population. The whole town is white: the people, the buildings, even its rocks and horses. The message seems clear: traditional westerns were white.

But, in The Harder They Fall, the Black towns are full of color.

The story leads to a final clash between hero and antihero, as would be expected in a western. But there is also a suggestion at the movie's end that these characters may have a future in film. Could a series be in the making?

Jocelyn Noveck reported this story for the Associated Press. Caty Weaver adapted it for VOA Learning English. Mario Ritter, Jr. was the editor.

genre –n. a kind or group of literature or art that has similar qualities

cast –n. the actors in a play, film, or television show

cinema –n. the film industry; the art or method of making movie

scene –n. a part of a play, movie, story, in which an action or activity takes place