The Human Side of Pack Animals

Update Required To play the media you will need to either update your browser to a recent version or update your Flash plugin.
By Anna Matteo
19 January, 2019

Like many languages, English uses animals in many of its expressions. And there are thousands of kinds of animals. So, when we talk about them, we put them into different groups. 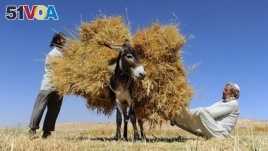 FILE - Afghan farmers load a donkey as they harvest wheat on the outskirts of Herat on June 23, 2014.

One kind is an animal used to carry packs, or heavy loads. Donkeys and mules are pack animals. We sometimes call these animals beasts of burden because they help to ease the burden of humans.

I'll never be your beast of burden

My back is broad but it's a'hurting

Another type of pack animals are the ones that live and hunt in a group, or pack. These include grey wolves and dolphins, just to name a couple.

Running with a pack has many benefits. When animals live in a pack, they work together. There is strength (and safety) in numbers. If you run with a pack, you can depend on others in your group. And there is always someone who has your back, or is ready to fight for you.

We can describe people the same way.

It is easy to hang out with people who generally agree with you. It is comfortable -- maybe a little too comfortable.

This can lead to a pack mentality, a situation where everyone thinks the same. After time you could become resistant to ever disagreeing, fearful of losing your place in the pack.

We also call this groupthink. This is a situation where members of a group feel pressure to always agree. Groupthink results in failures to think critically about an issue, situation or decision.

Groupthink or pack mentality can even be dangerous.

People caught up in a pack mentality do not think for themselves and can make bad decisions. For example, teenagers might start hanging with other teens who do drugs or commit crimes. So, parents often try to control which pack their child runs with.

With both animals and people, there is usually a leader of the pack.

They told me he was bad, but I knew he was sad.

That's why I fell for the leader of the pack.

In our human pack, the leader is the one who calls the shots. They make the decisions for the group.

Some people, however, have no desire to run with a pack. They might be ahead of the pack and are more forward thinking. They do not want to go along with what everyone else is doing. Maybe they are just faster! Or perhaps they simply enjoy the life of a lone wolf.

As a lone wolf you solve problems by yourself. You do not ask for help when making decisions. You are free from pleasing a group. However, you might not have many friends. After all, everything has a cost.

Now, we finish our show with yet another type of pack animal – the pack rat.

This is a small rodent of western North America. Pack rats have large cheek pouches, where they store food and other things. These pouches can fill up fast!

In the human world, pack rats are people who keep things that they do not need. They store them, not in their cheeks, but in their homes, garages and other storage places. A pack rat often says things like, "I can't throw it out. I might it need it someday."

When pack rats collect too much stuff and it interferes with their life -- they have become a hoarder. Hoarders have a difficult time throwing anything away. So, they usually find themselves surrounded by stuff, sometimes even buried under it!

However, sometimes it pays to be a pack rat or at least to know one. One day you just may need something they have collected – a 40-year-old newspaper, a bicycle wheel, or a cow bell. One look in a pack rat's basement or garage and you just might find what you need!

And that's Words and Their Stories. I'm Bryan Lynn. And I'm Anna Matteo.

Anna Matteo wrote this story for Learning English. Caty Weaver was the editor. The song in the middle of the show is The Shangri-Las singing "Leader of the Pack." The song at the end is "Pack Rat Blues" written by Don Burger and sung by Susan Trump.

burden – n. something oppressive or worrisome : the bearing of a load —usually used in the phrase beast of burden

strength – n. the quality that allows someone to deal with problems in a determined and effective way

pouch – n. a pocket of folded skin especially for carrying the young (as on the abdomen of a kangaroo) or for carrying food (as in the cheek of a hamster)

hoarder – n. someone who collects things in their home obsessively, including things that would commonly be thrown away: bags, old food, or broken items

cling – v. to hold onto something or someone very tightly