The Influence of a Non-Traditional High School Chief

Update Required To play the media you will need to either update your browser to a recent version or update your Flash plugin.
By Armen Kassabian
09 January 2021


Joe Clark was a non-traditional high school principal whose unusual way of enforcing rules became the subject of a 1989 Hollywood movie.

Clark died late last year at the age of 82. He gained national attention for his leadership at Eastside High School in Paterson, New Jersey.

"You are not inferior," is what Clark would often tell his students. Many of the Eastside students were African American or Latino. They grew up in a difficult environment. Many of the students who attended his school faced violence, crime, drugs and troubled family life.

Clark believed that students had to be shocked often to understand the influences that could prevent them from succeeding in school and in life.

In Clark's first days of working at Eastside High School, he expelled 300 students for fighting, destroying school property, abusing teachers and drug possession. The students who remained at school believed that higher expectations were being placed on them. They felt more pressure to perform better.

Before becoming an educator, Clark served in the U.S. Army Reserve. His experience might have influenced how he supervised his school. He was known to walk around with a bullhorn and a baseball bat. Some praised his efforts at discipline while others criticized his methods. 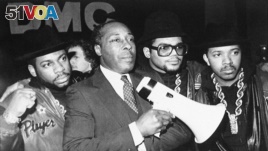 Principal Joe Clark stands with the rap group Run-DMC before the group gave a concert at the school in support of Clark's way of running his school. (AP Photo/Peter Cannata)

In 1989, actor Morgan Freeman played Clark in the movie "Lean on Me." That movie was based on Clark's experiences at Eastside High School. "Joe was a father figure to school kids," Freeman said. "He was the best of the best in terms of education."

Not everyone supported his methods. One teacher, who spoke to National Public Radio, or NPR, in 1988, said his methods were more like being in a labor camp than a public high school.

NPR recently spoke to Thomas McEntyre who said he was one of Joe Clark's former students. McEntyre said, "I never really got a chance to...thank him. We are your product. You did not fail us. No matter if you kicked me out, you did not fail me. You bettered me," he said.

After he retired from Eastside in 1989, Clark worked for six years as the director of a detention center for young people in Newark, New Jersey. He also wrote a book called "Laying Down the Law: Joe Clark's Strategy for Saving Our Schools." He described how he managed to turn Eastside High from a failing school into a success.

Clark was born in Rochelle, Georgia on May 8, 1938. His family moved north to Newark when he was six years old.

principal – n. the head of a grade school

bullhorn – n. an electric device that make a person's voice louder that can be held by hand

bat – n. a long round stick used to hit the ball in the game of baseball

discipline –n. control that is gained by requiring that rules be obeyed and punishing wrong behavior

Have you had a teacher in your life that has had a positive or negative affect on you? Share a story of what they taught you and what you learned from them.