The King of Soccer, Pelé, Dies

Update Required To play the media you will need to either update your browser to a recent version or update your Flash plugin.
By Mario Ritter Jr.
29 December 2022


Edson Arantes do Nascimento, known to the world as Pelé, has died.

The Brazilian soccer star was 82 years-old and had colon cancer.

Pelé was known far beyond Brazil's playing fields where he developed his skills. 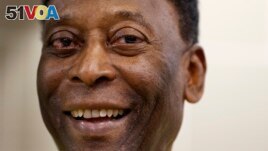 In 1967, for example, sides in Nigeria's civil war agreed to a cease-fire, so he could play a friendly game there. Britain's Queen Elizabeth II honored him with a knighthood.

And in 1986, the leader of the United States said this upon meeting the Brazilian soccer star:

"My name is Ronald Reagan, I'm the president of the United States of America...But you don't need to introduce yourself because everyone knows who Pelé is."

This was true. People everywhere knew Pelé for what he did on the playing field.

In 1958, he played in the championship game of the World Cup against Sweden in Stockholm. He scored two goals, one so expertly it is almost unbelievable to see. He was 17 years old, still the youngest player to score in a World Cup final.

Four years later, Brazil would again win the World Cup in Chile, although Pelé was slowed by injury. And, in 1970, Pelé was the star of a team of stars which again claimed the World Cup championship for Brazil in Mexico City.

No other soccer player has won three World Cup championships.

Later, he helped popularize soccer in America by joining the New York Cosmos of the North American Soccer League. In his final game, he played for 77,000 people in a friendly match between the Cosmos and his old Brazilian club team of Santos.

With Pelé and Brazil, the sport became "the beautiful game." And Pelé became known as the King of Soccer.

After his sports successes, he would become a sports minister in Brazil, a businessman and an ambassador for UNESCO, the United Nations cultural agency.

The International Olympic Committee named him "Athlete of the Century." The Brazilian government declared him a national treasure.

The famous star was known for his humble way of speaking. In 2013, Pelé told Reuters: "God gave me this ability for one reason: To make people happy." He added: "No matter what I did, I tried not to forget that."

His personal life had difficulties including the arrest of his son Edinho on drug-related charges. He was married three times. He had two daughters with women he was not married to and five children with his first two wives Rosemeri dos Reis Cholbi and Assiria Seixas Lemos. He is survived by businesswoman Marcia Cibele Aoki, his third wife.

"Pelé changed everything," he wrote. "He transformed football into art, entertainment. Football and Brazil elevated their standing thanks to the King! He is gone, but his magic will endure. Pelé is eternal!"

humble –adj. not proud or thinking of yourself as better than others

elevate –v. to lift up or put in a high position