Update Required To play the media you will need to either update your browser to a recent version or update your Flash plugin.
By Hai Do
30 August 2022


The last Soviet President, Mikhail Gorbachev, died Tuesday at the age of 91.

Russian news agencies reported the news based on information from Moscow's Central Clinic Hospital. Gorbachev's office had earlier said that he was undergoing treatment at the hospital.

Gorbachev became the leader of the Union of Soviet Socialist Republics, or USSR, in March 1985. He was in power for just over six years. But Gorbachev brought changes that ended the nuclear confrontation of the Cold War with the United States and remade the map of Europe. 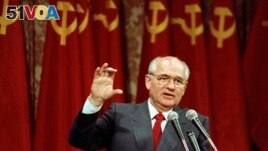 As general secretary of the Soviet Communist Party, he had set out to reform the system by introducing limited political and economic freedoms. But his reforms went out of control.

His policy of "glasnost," or free speech, led to criticism of the party and the state. It also led to national movements in the Baltic republics of Latvia, Lithuania, Estonia and other places.

Gorbachev and then-U.S. President Ronald Reagan signed a historic agreement in 1987 to reduce the number of nuclear weapons the two countries kept. He informed the world of the Chernobyl nuclear disaster in what is now Ukraine. And he ordered the release of dissident Andrei Sakharov, a critic of the Soviet system.

In 1989, Gorbachev chose not to use force to put down pro-democracy protests in Eastern European nations. Earlier Soviet leaders had sent tanks to crush uprisings in Hungary in 1956 and Czechoslovakia in 1968.

In his last months in office, one Soviet republic after another declared independence. Gorbachev resigned on December 25, 1991. The Soviet Union ceased to exist a day later.

Gorbachev told The Associated Press that he did not try to hold the Soviet Union together because he feared chaos in a nuclear country. "The country was loaded to the brim with weapons. And it would have immediately pushed the country into a civil war," he said.

He told the AP in 1992 after leaving office: "I see myself as a man who started the reforms that were necessary for the country and for Europe and the world."

"I am often asked, would I have started it all again if I had to repeat it? Yes, indeed," he said.

Gorbachev won the 1990 Nobel Peace Prize for his role in ending the Cold War. He spent his later years receiving honors and awards around the world. But he was widely disliked at home.

After visiting Gorbachev in the hospital on June 30, liberal economist Ruslan Grinberg told the armed forces news outlet Zvezda: "He gave us all freedom - but we don't know what to do with it."

The official state news agency Tass reported that Gorbachev will be buried at Moscow's Novodevichy cemetery next to his wife, Raisa.

Hai Do wrote this story for VOA Learning English with additional materials from Associated Press and Reuters.

confrontation –n. a situation in which two sides oppose each other intensely

brim –n. the top edge of a container or hat