The Many Uses of 'Would' in Everyday Speech, Part 1

Update Required To play the media you will need to either update your browser to a recent version or update your Flash plugin.
By Alice Bryant
28 June, 2018


Imagine that you are visiting a friend in Washington, D.C. Your friend takes you to a popular restaurant. You look at the menu and decide what you want: crab cakes. Your friend is taking a little longer to decide. So, when the server comes to your table, your friend tells you to order first. You say:

Although you expressed your request clearly, it is best to avoid using "want" when making polite requests. Instead, we use "would like."

This is just one of many uses for the modal "would" in everyday speech. A modal is a helping verb that is usually used with another verb to express ideas such as possibility, necessity and permission.

Today, we will tell you some of the uses of "would."

Let's return to polite requests. At restaurants and other places where we pay for services, a common way to make a request is using "would like." This phrase means "to wish to have."

Listen to the polite version of the food order:

We also use "would like" in polite offers. When we do this, we use question form. Here is how the server might respond:

Sounds good. Would you like anything else with that?

Along with food orders at restaurants, you may also make a polite request for someone to do something for you.

Listen to this line from a famous television ad for a fruit-based spread:

Would you (please) pass the jelly?

To many native English speakers, using "will" in such a request sounds demanding rather than polite or neutral. 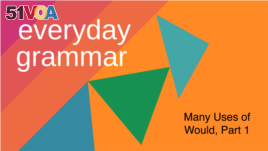 Everday Grammar: The Many Uses of Would in Everyday Speech, Part 1

There are other polite ways to ask someone to do something. In an earlier program, we told you about indirect questions. One of them includes the phrase "Would you mind...?"

If we use this phrase, the jelly request becomes:

Would you mind passing the jelly?

Common "yes" responses to such a request include: "No, not at all" and "Sure."

First, listen to "will" in direct speech:

"I will bring the drinks," Anita said.

When we change this to reported speech, we change "will" to "would":

Anita said (that) she would bring the drinks.

Another example of changing tenses in reported speech is when talking about the weather. Imagine that you are listening to a weather report on the radio. The reporter might say:

It will be sunny in the morning, but we can expect rain the afternoon.

Here is how you might tell someone else about what you heard:

The weather report said (that) it would be sunny this morning but rainy this afternoon.

Another everyday usage of "would" is in unreal conditionals. These conditionals describe what we would do in imaginary -- or unreal -- situations.

I would move to Japan if I spoke Japanese.

In this statement, the main clause comes before the if-clause. But, the order of the clauses does not change the statement's meaning. You could also say, "If I spoke Japanese, I would move to Japan."

Sometimes, in casual, spoken English, we leave out the if-clause in unreal conditional statements, but its meaning is understood. One situation when we do this is when giving advice:

How are you getting to Boston?

We're flying out on Friday.

Nice! I would arrive two hours before departure. The DC airport is usually crowded on Fridays.

The understood meaning is "If I were you, I would arrive two hours before departure."

Past unreal conditionals also contain "would." But they are more complex and require a strong understanding of present and past perfect verb tenses. You can read more about these conditionals in an earlier episode of Everyday Grammar.

Let's move to something a bit simpler. We also use "would" in everyday speech to talk about repeated actions in the past. This usage is called "past habitual." Here's an example:

When I was little, I would play hopscotch with my friends.

There are two rules for this usage. The first is that we must state the time period in the first part of the sentence -- "When I was little" for example. Second, we only use "would" this way with action verbs, such as "play" in the hopscotch example. We do not use it with stative verbs, such as: live, be, know, think, understand or want.

We could not, for example, say, "When I was little, I would be happy playing hopscotch."

Well, we've given you a lot of information. Would you like to practice now?

Join us again soon to learn about more ways we use "would."

You can practice in the Comments section below. Make sentences with "would" by doing at least three of the following:

modal verb – n. a verb that is usually used with another verb to express ideas such as possibility, necessity and permission

casual – adj. appropriate for use in informal occasions

jelly – n. a sweet and soft food made by boiling sugar and fruit juice until it is thick

phrase – n. group of two or more words that express a single idea but do not usually form a complete sentence

clause – n. a group of words containing a subject and verb and forming part of a sentence or a whole simple sentence

episode – n. a television show, radio show, et cetera, that is one part of a series

hopscotch – n. a child's game in which players hop through a series of squares drawn on the ground