Update Required To play the media you will need to either update your browser to a recent version or update your Flash plugin.
By Caty Weaver
02 October, 2015


The Hollywood film, "The Martian," opens to U.S. audiences on October 2. Actor Matt Damon stars as an astronaut left alone on Mars. His crew returned to Earth thinking he had died in a windstorm.

Damon's character, Mark Watney, must survive with few supplies and somehow get a message to Earth that he is alive.

The plan to release the movie this week was some lucky timing. On Monday, the U.S. space agency NASA announced it had found strong evidence of liquid water on Mars. That again raised the possibility that, with liquid water, there could be life. 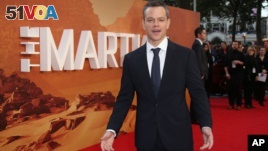 American actor Matt Damon at the European opening of "The Martian" in London, September 24. (Photo by Joel Ryan/Invision/AP)

NASA also took a part in the development of "The Martian." Director Ridley Scott and Matt Damon reached out to agency officials for help to make the story as scientific as possible.

In August, Damon compared space exploration with the movie. He told Reuters News Agency, "with the right funding and the right attention, these are the kinds of things that we will be exploring in the very near future and this is going to be a part of our kids' lives."

So how scientifically accurate is "The Martian?" Jeffrey Luger of Time magazine tried to answer that question. He pointed out two of the biggest falsehoods of the film. The first, Mr. Luger writes, is central to the story: a powerful, dangerous windstorm that forces the space crew to leave the planet. The very low density atmosphere of Mars, Mr. Luger argues, could not create a storm like that.

Mr. Luger also has trouble with the lack of danger from radiation on Mars. He notes that the six-month trip to Mars alone would expose the astronaut to 15 times more radiation than is permitted for nuclear energy workers in a year.

The magazine Popular Science also explored the movie's divide between science and science fiction. It noted the same windstorm and radiation problems as Time magazine.

But Popular Science also reported much realism in the details. Science writer Sarah Fecht points to Astronaut Watney's struggle to work in astronaut clothing, especially the gloves. And, an expert she spoke with said the stiff gloves are a real problem. They are very difficult to bend.

Popular Science also interviewed former astronaut Mike Massimino who said he found the acting realistic. He said astronauts grow very close through flight training and survival school. He said the movie shows the close relationships that are formed. "We take care of each other as best we can," he told the magazine. "When someone needs someone, there's nothing we wouldn't do."

"The Martian" is receiving excellent reviews from top critics. Anne Hornaday of the Washington Post calls it a "spirited example of how cool science can be." Mike D'Angelo of the A.V. Club describes "The Martian" as a "celebration of our ability, as a species, to solve even the most daunting problems via rational thought."

audience – n. people who gather together to see a performance

character – n. a person who appears in a story, book, play, movie or television show

funding – n. an amount of money that is available for something

daunting – adj. tending to make someone afraid or less confident; very difficult to do or deal with

rational – adj. based on facts or reason and not on emotions or feelings