The Missouri is America’s Longest River

Update Required To play the media you will need to either update your browser to a recent version or update your Flash plugin.
By VOA
18 December, 2012

This is Shirley Griffith.

And this is Steve Ember with the VOA Special English program, EXPLORATIONS. Today, we tell about another important American river, the Missouri. It is the longest river in the United States.

The first American Indians to live along the Missouri River called the river the Mine Sose. It means the muddy river. Even today, the Missouri is called "the Big Muddy" by many people. This is because it carries huge amounts of dirt from the land through which it flows. The dirt makes the river a brown color for much of its length. 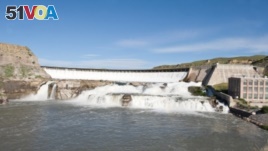 Many dams help control the flow of the Missouri River. This one is in Montana.
The Missouri begins in the Rocky Mountains of North America. It is formed by three rivers that come together in what is the north central state of Montana. The three rivers are the Jefferson, Madison, and Gallatin Rivers. They become the Missouri River in the southwestern part of Montana, more than one thousand two hundred meters above sea level. The river is clear and flows rapidly as it begins its travels east and south. It moves more slowly as it flows down to the waters of the Mississippi River, about ten kilometers north of the modern-day city of Saint Louis.

The Missouri travels four-thousand kilometers from the high mountains in the north to the low lands of the south. It flows along the borders of seven states: Montana, North Dakota, South Dakota, Iowa, Nebraska, Kansas, and finally Missouri.

The Missouri was a violent river, making travel along it difficult. Yet explorers and settlers used it as a way to move west. In the early Seventeen-hundreds, French fur traders began to travel along the Missouri to the lands of the great American west.

The United States government had bought from France a large area of land called the Louisiana Territory. This land extended from the Gulf of Mexico northwest to the Pacific coast. The story of Lewis and Clark's travels up the Missouri River and on to the Pacific Northwest is one of the great stories of American exploration.

President Jefferson sent the two men to explore the little-known river to learn all about the land on both sides of it. Lewis and Clark completed the trip in two years. The explorers were the first Americans to cross the Missouri lands to the Pacific Northwest.

Lewis and Clark brought back to Washington a detailed report about the plants, trees, animals, climate they found on their travels. Many different scientists have long studied these facts.

The two men also returned with a lot of information about the different Indian nations of the West. Since then, the Indian names have become well known through the many stories and books written about them. The Mandans, the Nez Perce, the Sioux, the Blackfeet, the Chickasaws, the Pawnees and the Crows were some of these nations.

Most of the Indians Lewis and Clark met along the way were a great help to them. One of the most famous was a woman named Sacagawea. She was a Shoshone Indian who had been captured by the Mandan tribe. The two explorers knew that the Shoshone Indians who lived near the Rocky Mountains had good horses. Since the two explorers began their trip, they had been traveling up the Missouri River by boat. They knew that they would need horses to help them in the next part of their exploration over land.

So, Lewis and Clark took Sacagawea with them. She could help them deal with the Shoshone tribe when they left the river and crossed over the tall, rough mountains. Today, the image of Sacagawea is on the American dollar coin. It honors her part in helping Lewis and Clark explore what became the western United States.

Soon after Lewis and Clark explored the territory, settlers began moving west along the Missouri River. They began their western travels on boats that took them from Saint Louis to either Kansas City or Saint Joseph in western Missouri. Then they took wagons to Oregon and California on the coast of the Pacific Ocean. It was the Missouri River that started them on their way to new homes in new lands.

A large part of the river became the border between two kinds of land, and two ways of life. On the east side were beautiful woodlands and lakes. On the west side were great open plains, stretching all the way to the high western Rocky Mountains.

The two sides of the river were different when the first European explorers traveled the Missouri. On the east side of the river, the explorers found Indian woodsmen living in tents hidden among trees. These tribes hunted deer. They fought their enemies by surprise attacks from hidden places.

On the west side of the river, the explorers found strong Indian buffalo hunters and fighters on horses. These Indians attacked out in the open and wanted no cover to protect themselves only the backs of racing horses.

There are similar differences today. On the eastern side of the Missouri are farms and tall corn. On the western side are horses and cows and cowboys.

It is said that you need to look in the middle of the Missouri River to find where the American West begins. The state of Missouri is in the center of the United States. It is named after the great river that flows from west to east through its center.

The city of Independence is in the western part of the state. It is considered the geographical center of the continental United States.

One of the city's most famous citizens was Harry Truman, who was the Thirty-Third President of the United States. He was president from Nineteen Forty-Five until Nineteen-Fifty-Three. When he left office, Truman returned to his home in Independence, on the shores of the Missouri River.

For many years after Lewis and Clark's exploration, only fur traders used the river to carry the goods they wanted to sell. They carried their furs in small boats that were light on the water and did not hit the bottom.

Beginning in eighteen thirty, the American Fur Company began to use steam boats to carry goods up and down the Missouri. This trade began to disappear in eighteen fifty-nine. It was then that a railroad was completed between Hannibal, on the Mississippi River in the east, and Saint Joseph, on the Missouri River in the western part of the state of Missouri. It was easier to move goods and people by train.

After World War Two ended, the United States government approved a major plan to develop the areas along the Missouri River. The plan included flood control and development along the river. Now a series of six huge dams in the middle area of the river control the flow of the Missouri. More than one-hundred smaller dams are on smaller rivers that flow into the Missouri. The dams contain the water from the melting snows in the north. They reduce the flooding that once happened down river almost every spring.

Today, boats continue to carry goods and people up and down the Missouri River as they have for centuries.
Related Articles
go top