African Immigration to US Keeps Rising

Update Required To play the media you will need to either update your browser to a recent version or update your Flash plugin.
By Bryan Lynn
21 February, 2017


The United States remains a popular destination for immigrants from Africa, according to the U.S.-based Pew Research Center.

The number of African immigrants coming to the U.S. has more than doubled since 2000, Pew said in a new report.

Monica Anderson is a research associate at Pew and the author of the study. She said one reason for the large increase is that many immigrants are refugees from Africa.

She noted that in 1980, only 1 percent of refugees admitted to the United States were from Africa. Today, that share is about 37 percent.

"That is one major factor that is driving the growth of African immigrants, but it doesn't tell the entire story," Anderson told VOA in an interview.

She said that over the years, certain U.S. areas have developed large, established populations for African immigrants.

One of those is the Midwestern state of Minnesota. The state is home to about 25,000 people of Somali origin. This is about one-fifth of the whole foreign-born population of the state. 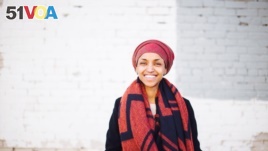 Somali-born IIhan Omar, 34, a former refugee, was elected to the Minnesota state legislature, making her the country's first Somali-American lawmaker.

"In different clusters in the U.S., African immigrants are really reshaping the immigrant population there," Anderson said.

Another example is the neighboring state of South Dakota, which has large refugee communities from Sudan, Somalia and Ethiopia. Overall, Africans make up about 15 percent of South Dakota's foreign-born population, according to Pew.

African immigrants in the U.S. include tens of thousands of refugees from Somalia, Sudan, Democratic Republic of the Congo and Eritrea, Pew said. But it also includes highly-educated doctors, engineers and others seeking a better life in America.

Randy Capps is the director of research for U.S. programs at the Migration Policy Institute. He said that as of 2013, 38 percent of sub-Saharan African immigrants had a bachelor's degree or higher, compared to 28 percent of all U.S. immigrants.

But despite the increases, Africans still make up a relatively small amount of the total U.S. immigrant population. Capps said there are both historical and geographic reasons for this.

"It's a long distance from Africa, and the number of people in Africa with sufficient incomes to migrate that far has been relatively small," he said.

He added that the path for legal African migration to the U.S. was not fully opened until the 1965 Immigration and Nationality Act.

The act, signed into law by President Lyndon Johnson, removed immigration quota systems based on national identity. This allowed for immigrants of all nationalities to be accepted equally. The act also made it easier for skilled immigrants to migrate to the United States.

Salem Solomon wrote this story for VOA News. Bryan Lynn adapted it for VOA Learning English. Hai Do was the editor.

factor – n. something that affects a particular situation, event, etc.

cluster – n. group of things or people that are close to each other

quota – n. official limit on the amount of people allowed