The other Pandemic: Violence Against Women

Update Required To play the media you will need to either update your browser to a recent version or update your Flash plugin.
By Dan Novak
23 May 2021


One in three women worldwide will experience physical or sexual abuse in her lifetime.

"Violence against women has been called, by global leaders, the human rights issue of our time, a pandemic," said Cheryl Thomas, the head of the organization Global Rights for Women. "One hundred-thirty-seven women a day are killed by their intimate partners or their family members," she added.

In the United States, President Joe Biden is now asking lawmakers to provide more resources for the Justice Department's Office on Violence Against Women. The proposal calls for increasing its budget to $1 billion, almost two times the current amount.

Patricia Cumbie was a young adult in college when she was raped. A man attacked her at a party. "I remember at the time feeling like, ‘Oh, is what happened to me a crime or not?' And I think that's a very common reaction for a lot of survivors, you know, because violence against women is so normalized."

The United States has been a world leader in the violence against women movement. In 1994, Congress passed the Violence Against Women Act (VAWA), which created the Office on Violence Against Women. Joe Biden, a senator at the time, led the push for that law. It was the first of its kind in the world.

Cumbie, who also works with Global Rights for Women, says the U.S. sets an important example.

"Domestic violence is the privilege in power that men have to abuse women," she said. "There is stranger danger," she continued, "but by and large, the violence is carried out by people that we know and love...."

That fact, she says, makes the issue more complex and difficult to talk about.

Comfort Dondo, a Zimbabwean immigrant in Minneapolis, says she spent five years in an abusive marriage.

"And when I called the Minneapolis Police Department... they would come, and they would not even talk to me or take a report," she said. "They would talk to him."

The abuse was not only physical, Dondo says. Her husband's better knowledge of the legal system resulted in her losing custody of her son. She is now seeking to get him back.

She said "When we talk about domestic abuse, it goes beyond just the beating. It is the emotional torture of alienating a woman from her babies." 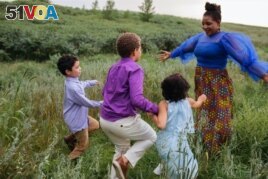 Comfort Dondo with her children. (Photo by Rebecca Parks)

Thomas says violence against women is accepted because most societies are used to seeing men in positions of power and control. The violence, physical and emotional, sometimes includes separating women from their friends and loved ones.

Domestic violence is closely related to other forms of inequality.

Dondo said her white husband has much more power over her, a Black woman, in America.

"I speak for African Americans, that's my experience, when we end up marrying white men," Dondo said. "The white man has more power over her, access to money, for good lawyers, language, and they also know the system very well."

Stopping violence before it happens

Victoria Banyard is a professor of social work and director of the Center on Violence Against Women and Children at Rutgers University. She thinks financing crime prevention is a good step but also that more money should be put toward stopping abuse before it starts.

Violence against women can take many forms, she points out, from verbal, emotional abuse and physical violence, to blocking a woman from her friends and loved ones, to economic abuse.

"If you're experiencing physical violence, for example, you might have to miss time at work," she said. "A woman might lose her job as a result. Sometimes, abusers also block victims from having a career at all."

There are many ways domestic violence affects women and holds them back economically, she said.

After escaping her marriage, Comfort Dondo went to school and completed a master's degree. Later, she started the nonprofit organization Phumulani which works to stop violence and abuse of women, especially those from African ancestry.

She and other experts believe it is critical to include men in the discussion about stopping violence against women.

Men must be held, in her words, "accountable, with love ... so that they will not go and say, ‘We didn't know that was abuse.'"

Dora Mekouar reported this story for Voice of America. Dan Novak adapted it for VOA Learning English. Caty Weaver was the editor.

intimate-adj. having a very close relationship : very warm and friendly

privilege-n. a right or benefit that is given to some people and not to others

custody-n. the legal right to take care of a child (such as a child whose parents are divorced)

alienate-v. to make (someone) unfriendly : to cause (someone) to stop being friendly, helpful, etc., towards you

verbal-adj. relating to or consisting of words